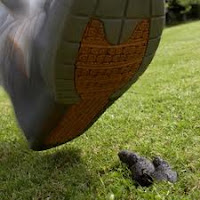 My husband Pants is the kindest, gentlest human being around. He’s soft around the edges and usually lets me win when we argue. He never speaks poorly of people and always chalks up bad decisions made by friends and family to “perhaps they’re just having an off day”.

I’m the hot head, not him. I’m the blurter, the impatient one. The one who yells when we get cut off in traffic. The one with the quick trigger finger to point out little injustices in the world. Not him.

We had just finished a meeting with a client we both share (an excuse to see each other during the workday), and we were walking back to Pants’ parking garage. It was about 30 degrees outside (unacceptable weather for California) and Pants noticed that I had left my coat in my office. Being the perfect gentleman, he whipped off his wool coat and draped it over my shoulders. We strolled hand in hand (are you getting a little nauseous over the happy couple crap? Good, because it’s about to end).

As we approached his office building, Pants stopped walking. He motioned me to stop too. This is where I became irritated. My nose was getting frost bite.

“Look over there.” He pointed to a dog getting ready to drop a load on the lawn across the street. I wondered out loud why we were watching a dog take a crap.

The dog belonged to a police officer who was standing next to him while he shat (real word, look it up). “Good boy,” the officer said.

Pants mumbled something about betting that the officer wouldn’t clean up after his dog and wanted to see if he was right. I was mildly amused.

After several seconds of us staring at this squatting dog while we shivered in the cold, the officer took his leash out of his pocket, clipped it to the dog’s collar and walked away.

And it went downhill from there.

This is when I took off in a full arm pumping sprint in my three inch high heeled boots, heading straight for the entrance of Pants’ office building. But before I reached the door, I heard another, “HEY!”

As I crouched down behind a raised concrete planter box outside the front door, I felt like I was in the middle of a bad cop movie.

The officer answered, “yeah?”, slightly annoyed at the fact that some yahoo in a business suit is yelling at him.

“Are you gonna pick up that shit?” I peeked around the planter box and saw Pants pointing his finger at the officer and then at the poop. By this time another officer had approached the chaos and stood there staring at Pants which compelled him to repeat.

The offending officer looked at his partner, shrugged his shoulders they turned around and kept walking, luckily.

By this time, I was shaking – half cold, half sacred that I was going to have to bail my husband out of jail for “officer harassment”. I couldn’t imagine how he would explain this one down at the station. “Get your hands off me. Your officer failed to pick up his dog’s crap and you’re arresting me? I am filing a complaint. This is an outrage! A travesty!”

I stood up after not hearing much of anything else and there was Pants heading straight for me, hands waving, yelling, “Can you believe that? They would have ticketed us in a heartbeat if Conrad were to drop a load in front of them. I can’t stand the injustice!”

I immediately flashed back to Pants giving me a lecture last week about letting things go when the gardeners failed to fix some sprinkler heads after being asked… twice.

I used good judgment by not bringing that up at this particular time, as Pants and I walked to the car. I simply grabbed his hand, gave him a smile and giggled quietly to myself.
Posted by A Mordant Brown at 2:48 PM