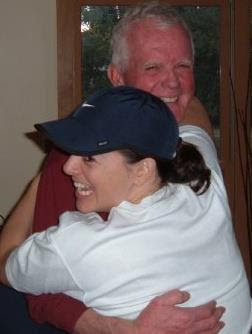 I had to say good bye to my best pal this month. Hardest dang thing I ever had to do. He died in his sleep on February 4th blindsiding me with a two by four. I don’t plan on feeling this way again anytime soon, so for those of you reading this, eat your veggies, don’t text and drive, avoid microwaving plastic containers, wear a helmet when you’re skiing, and blow out your candles before going to bed. I don’t want to lose anyone else.. at least for another five years. After that, you turkeys are on your own.

The fact that my bestie was 33 years older than me may have had something to do with the statistical viability that he would go first. We certainly talked about it. I just didn’t think it was going to happen so soon, and without warning. But really, who am I fooling? I would probably be saying the same thing 20 years from now if he were 92 and kicked the bucket in his sleep after some wine and an ambien.

Death, no matter what shape it takes, is something for which one cannot be fully prepared. And it was certainly the case with the ol’ guy. I have quickly learned that the two items in the recipe for feeling half way normal again after a loved one poops out are time and memories. Nothing else helps. So, since it will be awhile before I can’t think of him without wailing like a two year old, why not share some stuff the old man did to make me laugh?

I met Jerry McFetridge in 2001 on the heels of a nasty and painful breakup. I had a lot of useless and anxious time on my hands and needed a buddy. I found him… in a bar. We were both attending a birthday party of a mutual friend and we sparked up a conversation. He was hard of hearing and so I remember shouting (and accidentally spitting) at his head. He kept wiping my spittle off of his face and laughing, which is something I like to do, so I teased him about being deaf and we sat there with our drinks – mine, a draft beer, his, a Chardonnay over ice (which I also teased him about) and he quickly became my kindred spirit.

From that day forward, McFet and I spent nearly every damn day together. A couple of years after we met, I started dating Pants who would become my future husband. McFet had a front row seat of the courting process. I recall Pants asking me out to dinner or a movie or drinks and my response was always, “Sounds great. I’ll call McFet.” On the third date, it was getting obvious that I came as a package deal.

I am convinced Pants married me because of that deal.

Over the years, McFet and I have had some moments. He called me his dark cloud. I called him my acerbic spaz. Now, you have to understand something; McFet averted trouble by a nose hair, not on purpose, mind you. All of his "close calls" were by accident. Call it stubbornness, ignorance or subconsciously wanting a good story to tell the next day; the truth was he always seemed to get into the thick of it, with me by his side. Another thing before we get into the details: McFet wouldn’t listen, couldn’t hear, and ignored the subtle teachings of common sense that made for uncontrollable full body fits of laughter. His laugh required movement of every major muscle in the body, starting with his shoulders, down to his feet. Think of Elaine’s dance on Seinfeld and you would have a good visual of this guy’s guffaw. It was hereditary too so he came by it honestly. I see that grand mal laugh in his kids sometimes.

McFet was a prickly pear. Sharp, sacrastic, biting at times. But soft, sensitive and so loyal on the inside. If you needed anything – someone to tell you to wise up and act straight when you were an emotional mess, he was there. Someone to fix your flat bike tire only to have it poop out of you 12 miles in, he’d do it. Someone to meet you on a Saturday afternoon for a death hike, he’d reluctantly go after being called a pussy a few times, he would be huffin and puffin right behind you with his REI walking stick. Someone who would share a bottle of wine and a laugh over the most humiliating day you’ve had, because nine times out of ten, he had those days too. Or someone who would not only lend you his truck, but help you pile it high and deep and drive it to the dump several times.

Being Jerry’s friend meant you were never alone or lonely. His friendship encompassed the full spectrum, the total package, even blow ups, and boy, did we have our share of doozies.

I remember a particularly tense situation where we were having dinner, and probably too much wine. The subject of pension reform came up. In no time, that intellectual debate ended with him calling me a hypocrite and me telling him to shut his stinky pie hole. He stormed out of my house mad as hell.

“U have always been against pension reform. Wasn't that the gist of the many conversations we've had on this sensitive subject. In fact you've castigated me soundly for my position on the basis that I've had both hands and feet in the public trough.”

To which I replied, “You’re a grade A asshole.”

To which he replied: “Does that mean you’re not feeding me dinner at six tomorrow night?”

Another truly notable instance: We decided that instead of hiring a floor guy, we would retile Pants’ kitchen while he was away on a guy’s only trip to Mexico (yeah, I let him go, but not without destroying his house). It appeared to be a relatively small project – about 750 square feet.

We found ourselves in line to check out at Home Depot and a really tall and scary looking dude cut right in front of us. I, of course, said, “back of the line, bub.”

The guy responded by pointing out the fact that I shouldn’t even be in Home Depot, that instead, I should be at home, barefoot in my kitchen cooking muffins for my husband.

McFet, who has an abnormally red face due to his Irish heritage, turned seven shades redder, walked up to the guy, eye level to his chest and said the following, “You better step off, buddy or I am going nuclear on your ass.”

The guy took one look at this 70 year old Irish firecracker and went to the back of the line.

McFet was also known as an illusionist. He had an impeccable way of convincing his friends and family that they didn’t need to hire a contractor or a plumber or a sprinkler installer or painter. All you need was $200 and a weekend. I learned that he was full of crap after painting my house took three and a half months and $3 grand.

In fact, he built his own house by hand without a general contractor - only a handful of workers and suckers he called friends (you're lookin' at her). It took him 10 years to do it and not without incident. He had exactly sixteen injuries ranging but not limited to a busted thumb, a cracked tooth, broken glasses, almost falling off of the roof in a wind storm, a near miss to the head by a sledge hammer, a split lip, glass stuck in his foot. But he finished. In fact, his last project was complete two weeks before he died – an outdoor shower.

McFet was otherwise known as a spaz. He had an unhealthy aversion to tying items down in his truck. Things that have fallen out include: a ladder, which had him cited (anonymously until now) in the Sacramento Bee after a near 12 car pile up; a couple of mountain bikes – mine was a disc break, full suspension Trek that looked like an accordion once the highway patrol pulled it off Interstate 80 (incidentally, McFet said he could fix it easily); some nice new bookshelves that he quickly returned to the store because they were “defective”, a rented Home Depot dolly, and a high chair he gave to his grandson.

McFet was also known as hard of hearing. One time, Pants had given him a little blue pill when he went to Italy two years ago in the hopes that the old guy might get lucky. He thought it was an ambien and took it on the plane.

When the book “Shit My Father Says” came out, he received it as a gift from one of his children and brought it over one night to read. We shared a bottle of wine and read it cover to cover. McFet said, “This a-hole sounds a lot like me.”

That got me thinking. Maybe I will start a book of Jerryisms. So, on the five nights a week he was with us, I began writing them down. Here are some of my favorites:

On the Republican presidential races:
"I just found out watching the Rep debate tonight that Ron Paul and I were drafted in the same year: 1962. None of the other warmongering morons running ever served."

I replied: "That's 10 years before I was born. I could give two shits."

He replied: "Age is relative when you're a warrior, fight on."

On the Vagina Monologues:
“when did this bubble up? I thought the woman’s movement was petering out?”

On Facebook:
"This is the true epitome of narcissism with you ex genners."

On a ZZ Top Concert:
"Now that would be a good concert. That will bring out the meth heads and the pot smokers. That will be a pretty good crowd. I’ll get us tickets."

On making it in the wine industry after having two not-so-successful years growing grapes:
"Say, you know how you make your first million dollars? Start with two."

On bringing a 2 month old baby into a bar for a final final:
“Oh come on, barkeep, it may be a bad idea, but it’s not against the law."

On women:
"Come on, what do you want now, equal rights?"

On the threat of posting his quotes on my blog:
“Knock it off, Brown, that’s just candy mouth talk between us friends."

McFet told us on many occasions that the way he wanted to go was with a good heat on , gow eyed and grunt brained he would say. Go to bed and just not wake up.

I end with this: Jerry loved his family, especially his grandkids. He talked about them incessantly, wanted a better life for them than any of us could have. And he set out to do it in his signature crotchety way... he also loved his friends, telling stories upon stories about the good old days, which incidentally, he was still carrying out until his last day.

I hope that by sharing some of our stories as best buds, it will invoke the importance of friendships elsewhere. I hope we can gather together and be closer as a community because of people like McFet. May his memory, his humor, and intelligence live forever.

And may McFet's friends find peace in his memories down to the last one. He left life the way he left most social occasions, right in the middle of your conversation, with a pounding on the table, a grunt, and a “Catch you later, kid.”
Posted by A Mordant Brown at 3:48 PM No comments: