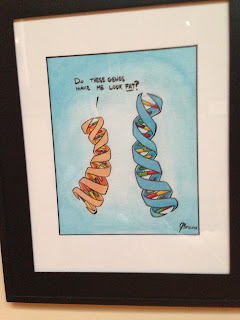 I always wonder what types of characteristics parents send down the shoot to their offspring, what sticks and what doesn't when these little human beings turn into full fledged adults. What we could have been had we picked up this gene, not that one? These unanswered quandries keep me up at night. I'll admit it.

What could I have been? A florist? My mother has a green thumb; her garden could have put those high end entries in Sunset magazine to shame. Alas, I have a hard time keeping a indoor cactus alive.

Could I have been a repo-woman? Surely, my dad had the skills of scaring the shady to cough over an unpaid T.V. with one look. But when I give the infamous Brown side-winder-stink-eye, people hand me a tissue and ask if I have something in my eye.

How about a pianist? My mother made records, started out as a music major at Cal Berkeley. I can barely stumble through Mary Had a Little Lamb.

My parents, collectively, are artists, golfers, cooks, health nuts, travelers, fiscal conservatives, social libs and politicians. Out of these wonderful talents, I picked up the least appealing: politics. Yet, I am not the true politician, the one who precinct walks, has a campaign promise or two, someone who adheres to their constituency. I am a lobbyist. I adhere to my clients, relationships, the classic art of negotiations. It's a great living and I am proud of what I do. Most of my friends are curious, some even intrigued.. that is until they find out what my brother does for a living. Then it's: "Can we change subject from California politics to what your brother does? It's not that I'm not interested in what you do, I just can't get over the success of James Brown."

And yes, that's his name: James Brown. No, he does not sing about being too hot in the hot tub. He doesn't sing period. In fact, I don't even think he can dance. (He's white.)

He did, however, win the lottery in the genes department and got the golden ticket: he's making it big as an artist. I will stop there and let the eye rolls and sighs commence...

Read on if you have enough self confidence to feel happy for his success while counting the blessings in your own life. It's a hard pill to swallow.. especially for his barely stable sister. *Two sighs coupled with a triple eye roll*

Let me start from the beginning so we can all appreciate his struggle to get where he is today. (It's easier to accept this way, trust me.)

JB spent his childhood drawing little action figures when he was sent to his room for fighting with me. And since that was often, he got really good at creating monsters, Star Wars figures, animating stick figures into fire rings as he shuffled post-it note paper. He took after my mother who was always painting, always creating art on wood slabs, recreating her favorite dolls in some crazy art deco brilliant nonsense none of us artist neophytes quite understood. By way of example, my artistic talent was stunted by a 1979 Christmas present for mom made of old rubber bands, nails and a 2 by 4 slab, which spelled out, "I love yov." Making the "u" had me stumped.

JB began his career in his old 7 ft by 7 ft childhood bedroom as a resent college graduate. He was broke, refused to adhere to the "man" and tried to find animation work, while my parents forced him to pay rent and do his own laundry. His dream was to find work in the movies.. or commercials.. or clever youtube videos. I do believe at that point, he would have animated a pile of dog poop had someone given him a chance and backed it up with a few hundos.

JB was offered a (free) internship in the Bay Area to animate something like poop. He accepted with gusto and worked as if this was the best animation job on the planet. He became a sponge, soaking up every detail of creation: how to draw, move the thing you draw, and transfer the thing you drew and moved to a computer. (Pardon the elementary narrative of process. Oh, and if you are one of JB's geek animator friends, eat me. I am doing the best I can with the non-creative gene I did NOT get from my folks. Pound sand. Your non-talented siblings are thinking what I am expressing.)
Cut to circa 2000 when JB got a job offer from an animation company in Santa Monica where he lived (was forced to share rent) with our equally jealous cousin who also did not win the artiste gene from the parental units. Sorry, Abe. You did, however, acquire the writing gene from my uncle, your father, so I am pissed at you too. See all of overused commas in this piece? Thy angst is evolving exponentially.

JB then got the opportunity of a lifetime to join a reputable studio in Berkeley and return to his Bay Area roots. He and his smart and beautiful wife did not have to move into my parents’ house due to Bay Area prices. They actually bought a house in Pleasant Hill and JB got to work on projects such as Stepford Wives, Enchanted, the classically grotesque movie Ted, and my favorite, those Blockbuster commercials with the chipmunk and bunny.. or was it a hamster?

JB had made it big. He followed his goofy little action figure dream that every 6 year old kid fantasizes about after watching Cars or Toys or The Incredibles. And if the story ended there, you would feel green-eyed but happy for him and his family which now includes two kids, right?

The story doesn’t end there. Grab a beer. It gets better (worse)..
For the past three months, JB has been employed by Pixar. Yes, the same Pixar with the bouncing ball and the lamp and Monsters Inc., University, Cars, Toy Story, the Incredibles, and on and on and on.

He is one of a group of animators working at the college-type campus on movies that shall remain nameless, the story lines are under a lock and key. It’s like he works for the CIA or something. Or, perhaps he just doesn’t want to tell his big mouthed envious sister how he spends his day.

I recently visited JB at work for two reasons: 1. It’s effing Pixar! And 2. I didn’t believe he worked there and had to see for myself.

The story doesn’t end there. Grab a shot. It gets better (worse)..

He’s also making a killing on selling his art. I had to pre order.. PRE ORDER.. a print he made before he showed it at an art show in Berkeley. Since when do blood relatives have to reserve a piece of art from their immediate family members? Where's the complaint form?

Talent runs in this family. It sure does. The tributary that carried the art gene, however, ran right past me and hit my little brother like a firehose.

And frankly, it pisses me off.

Posted by A Mordant Brown at 4:19 PM No comments: