The Dog Days Are Over? Not If You Know Camilo 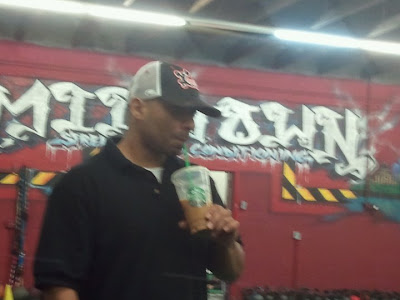 One would think I had learned my lesson two months ago when I decided to step up my workouts with Midtown Strength and Conditioning’s devil in disguise, Camilo by getting a little mano y mano time.

The last time I got Camiloed, he ruined the way I saw the world. My thighs, my piriformis (if you don’t know what this is, google it. It’s a muscle I didn’t know existed), my belly, my traps - these body parts haven’t been the same since. But they, along with my brain, have short term memory loss and convinced me to come back for another beat down. And since I never travel alone, my dear friend Tye, who seems to be game for any hair brained idea, was with me last time, and agreed to join me for round two. Poor Tye.

Similar to child birth, we forgot the historic pain and decided to have another two on one. Besides, we were stronger. We were rugged. We just finished Tough Mudder. Bring it, Milo. Seriously, you won’t be able to tame these guns..

Tye and I had been shoulder deep in work, having just successfully put on a well attended seminar on public retirement (yawn) and even though our minds were tired, our sedentary week needed a jump start.

“I have an idea, Tye. How about tomorrow morning, we get Camiloed before work.”

Tye wasn’t sure he was mentally prepared, but who is after hosting 150 seminar attendees?

And really, did Tye have a choice? For the sake of me calling him names that resembled weak animals and crying babies, he relented.

Camilo, having already drunk a concoction of Red Bull, some amino acid sprinkles and something else that I am sure is not legal in the States, he had that crazed look in his eye when we entered the gym.

Typically, Camilo starts his popular noon classes off easy (which I attend on a regular basis) – a little mobility, stretching, a slow two-block jog.

But like a seven on the richter scale, he launches into the hell that will consume us for the next hour.

I should have ducked and covered. Instead, I grabbed a 26 pounder. He yanks it from my cold dead hands and replaces it with a 44 pounder.

I start to sweat. I glance at Tye who is sweating more than me, and mouths, “I wasn’t f%$%% ready for this.”

Tye doesn’t typically swear. This is where I determine that he’s mad.

We finish and I water board myself under the spigot. This sucks.

Camilo tells us we have 30 seconds to rest. That’s enough time for me to do absolutely nothing except for think about the next round of pain.

The next 45 minutes were a painful blur. They involved more burpees than my age. (Note: I will be turning 40 in May. I should not be doing burpees at my age), prowler pushes with more weight than I can add in my foggy head, and medicine ball twists, slams, lunges and keg tosses, which made me think of beer, which then made me want to puke, which then made me want to lie down in front of the big industrial fan and sleep.for.30.more.seconds.

I peered at Tye only a few times. His sidewinder sink-eyes were almost worse than the push presses we had to do.

Let me to discuss the elephant in the room. I think I am capable of more than I actually can do. It goes back to the inflated ego thing. And every time I decide to prove it to myself, getting Camiloed humbles me. It’s a test of wills, a mental game I play with him, the gym, Tye, me. And I lose. Every single time.

I walk into the gym as a gorilla.

I walk out with a baby monkey on my back.

And it’s not without good reason. I have accomplished what I have set out to do physically, kind of..

I have completed the ever elusive double under jump rope.. embarrassingly so. In fact, if you blink, you may miss it and end up witnessing a tangled mess of rope and hair and a subsequent launching of whatever is in my hand at the time – water bottle or jump rope. Just make sure you are not within range.

I have completed my second Tough Mudder, but just barely. It took five and a half hours, 6 bandaids, 1,255 cuss words, and a couple of friendship enders.

With this extensive repertoire under my belt, you’d think I could handle Camilo by now.

I just have to figure out how to master his workouts without him knowing it so he doesn’t decide to ratchet it up.

I don’t know if that’s going to happen. He’s too stealth a poker player. He won’t let me see his hand.
Posted by A Mordant Brown at 4:17 PM No comments: