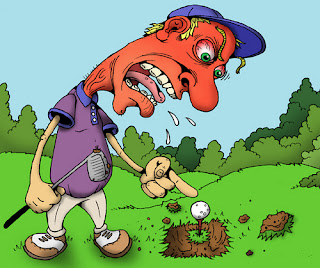 Listen up. I have pretended for far too long to be good at a sport that has me wrapped around the axel of narrow fairways, collared shirts, and an obscenely expensive bag of alloy batons that are good for nothing other than breaking car windows of philanderers.

I am just about to call it quits. The seven iron I held in my death grip today almost went through the nose of my fifty-dollar-an-hour coach whose only objective is to get me out of the “embarrass myself” phase during career networking opportunities. Arguably, potential clients seeing me use that piece of titanium as an axe to chop the greens up and then launch it like an Olympic javelin in the next fairway while yelling profanities that would make a sailor blush is not good for business.

I don’t want to. I consider myself pretty athletic and given enough time and practice, I figure I could get pretty good and hold my own among most hobby golfers. Typically, they tend to be men who keep better track of their scores than their checking account balances. Just a friendly observation.

The fact that it’s considered a man’s sport (i.e. Augusta, Bagger Vance, the “chick tees”) has me even more motivated to actually make contact with a ball the size of my father’s kidney stone he passed back in '91. Ludicrous.

Let’s back up and recap how I came to hate the stupid game of golf, and thus myself.

My grandmother, who I lovingly called Dama, was an avid golfer back in the 70's and 80's; she was almost obsessed with the sport, and frankly quite good at it. She figured those who weren’t as high on it just hadn’t had the exposure. For my birthday one year, she thought it would be a true gift to take me to the driving range to hit an offensive amount of range balls. I might have mentioned I would be just as happy at Chuck E. Cheese playing skeet ball, but she thought she was simply providing me an entrée to a lifetime of athletic prowess and bourgeois stature.

She did this by bribing me. She preceded our sessions by dangling the Shirley Temple carrot in my face after our outing. "If you don’t throw your golf club in frustration out into the range like you did last time, I will by us a tasty beverage.”

My favorite times with Dama weren’t swinging the clubs. They were hanging out at the bar afterwards, flirting with the crisp white shirts who fawned over her swing.

I wanted that attention.

When Dama died in 2000, I took up the sport in her honor as if it were my own. I told people I was a decent golfer (not true), that I had my own clubs (I borrowed them from my short male friend from work), and that I could drive about 200 yards from the tee box (also not true unless you counted the ball bouncing down the cart path two fairways to the right.)

When I started playing at work functions as a way to network, people saw me for what I was – a lump who was vaguely familiar with the rules but who knew the drink cart ladies by first name. I became kinda popular.

What I lacked in talent, I made up in embarrassing incidents – anything to keep the attention off my Happy Gilmore-esque swing. For instance, I noticed early on whilst tootling around mindlessly in a golf cart, that public restrooms were a scarce commodity during an 18 hole outing. Totally misogynistic, in my opinion, so I took it upon myself to, as my fellow golf groupies referred to as “drop trough” behind a tree and relieve myself of the copious amounts of tasty beverages I consumed on the front nine.

Granted, I was very close to getting 86’ed after several warnings, but bright side: no one was talking about my five foot worm burner off the first tee… in front of the world.

I tried to get serious about the sport after people started referring to me as the post-Bay Watch David Hasselhoff of the golf world. I was an embarrassment to myself and others and would mask my inability to hit that minuscule orb with inappropriate behavior.

I hired a golf pro to fine tune my swing and give me a few pointers. I tricked a girlfriend who sucked as bad as I to join me – again, another subtle diversion to get the focus off of me.

On that first day of lessons when Very Attractive Golf Teacher showed up, I knew I wasn’t going to learn a thing. Girlfriend and I would try to whiff the ball on purpose to get his attention and then giggle behind his back. He called me Amykins. My fate was sealed when on the third lesson he arrived with a nice sized marijuana nugget stuck to his polo vest, his eyes bloody half moons.

But I plugged along over the years, hacking up manicured fairways, losing a good $500 in golf balls that claimed to improve my aim, and throwing my back out when I swung too hard without club to ball contact.

After a while, I made up excuses not to play. Those included the following: “I have to work.” “Oh, look at that. I went and forgot my golf shoes.” “Sorry, I can’t be farther than 30 feet from the facilities at any one time.”

Years went by without me picking up a club, which frankly, felt liberating.

Then my son, Yack was born, which allowed for additional excuses to not play the bloody sport. But, what do you know, when he turned three he asked if he could take up golf. His father, Pants bought him some peewee golf clubs off of EBay. Where was all of this coming from?

And yes, I do believe you don’t turn into worm food after you die. Instead, you come back and haunt your living family members via their offspring.

“What about baseball”, I probed, “have you considered karate?”

He responded by taking his shiny new clubs out of their bag and swinging money shots into my bushes.

Now we are both beginners, taking lessons with pros at a nearby golf course once a week. Yack is improving dramatically, now working on his aim rather than his swing.

It’s an entirely different story on my end.

Irrespective of my inability to make contact without front loading the entire green, I have a solid coach. He’s engaging, patient and all business. He has a soft approach but he’s hard on focus (of which I have none) and he won’t let me leave until I hit a ball long and straight. Note: I have been there until almost dark most days.

And I am a pretty good student. Yack and I go to the driving range at least two times per week and report back when lesson time rolls around. I concentrate (to the best of my ability) and play out the instructions of last week’s lesson.

But here’s the thing: After close to a dozen lessons I either chunk dirt, hit worm burners or loft elephant butts – those are the high and stinky ones. In fact, I actually ripped off the band aid and played nine holes with Yack and Pants recently. And true to form, I drove a dirt clump off the second tee farther than my ball.

When I reported back to New Golf Pro about the train wreck, he asked about my favorite song.

That’s an easy one: Ramble On by Led Zepplin.

“I want you to put that song on repeat in your ear plugs, grab your nine iron and swing back and forth until you don’t have to think about it.”

We were really starting from ground zero.

But I did what I was told: sweep the earth, right shoulder even with my left, start with the hips, heels back, don’t grip the club like I am holding on to a last call beer, and let my left eye stare at the back of the ball. Get out of my head.

Now if I were a sane person, I would forgo this little exercise and use said club to un-lodge Yack’s action figure out of the dryer vent.

Alas, I had something to prove to New Golf Pro during our next session so I zeroed in on a lawn patch in my beautifully manicured backyard and began my quest: leaves are falling all around, it’s time I was on my way. Thanks to you I’m much obliged, such a pleasant stay.

After an hour, I was supposed to be in a groove. The only groove I felt was the major divot in my lawn that almost caused me three sprained ankles.. and served as a place for our cat to relieve himself.

But all wasn’t lost. Recently, I took a trip to see my cousins in Colorado and my annoyingly stellar 10 handicap cousin offered to take me to the driving range. I obliged but provided the requisite excuses of my pending shankers. “I’m taking lessons. He’s readjusting my swing. It’s a new game for me.”

For those who golf, it’s universal knowledge the three wood is the hardest club in the bag to hit. Perhaps that’s not true. Perhaps that is what I have been told from the people around me who cringe when I yank that puppy out and swing like a banshee just to have the ball dribble a few feet in front of me.

For what it’s worth, I garnered the courage to whip it out in Colorado and test my newfound head space. And after a few vital tips from Golf Cousin, I lofted those balls far and (relatively) straight. I hugged Golf Cousin and told him he was the Viagra of the three wood.

When I returned to lesson number whatever a couple of days later, I made the grave mistake of bragging about my new found loftiness with the three wood.

New Golf Pro asked me to show him.

He probably thought I was lying, considering I couldn’t get that blasted ball above 1 foot off the ground and 20 feet in front of me.

We worked on my swing until the sun went down, promising to leave on a good note, which never came.

All the while, Yack, finished with his lesson, yelling from the sidelines words of encouragement, “Mommy, you’ll get the hang of it someday, but let's go. I'm hungry and it's dark outside.”

Shhh, little man. I almost have it.

Posted by A Mordant Brown at 9:09 PM No comments: