The Key to Ski at Three 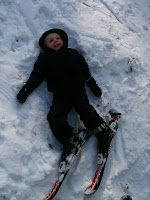 Olympic swimmer, Spanish translator, sponsored mountain biker, and now add professional skier to the list. Yack has some future ahead of him.

I was never going to be that mom – the annoying kind who gets her child up at 4 a.m. to go to swim practice for four hours before school starts. The kind who forces their kid to go mountain biking in the rain because she thinks it will toughen him up for competition. The kind whose idea of relaxing is practicing the constellations en espanol.

Oh, but I am that mom. And I have hated myself for it, until today where I saw a glimmer of joy on my son’s face when I forced him into doing something that made him cold and miserable.

Let’s back up. When Yack was seven months old, I signed him up for swim lessons. Well, swim lessons is a misnomer. Float lessons is a more accurate description. This Infant Resource Swim program forces your kid to either be deathly afraid of the edge of a pool, or if luck would have it and he happened to fall in, to float on his back and scream like a banshee for help. At first, I wasn’t too concerned with whether Jack liked the water or not. (An emphasis on the "not", screaming bloody murder to get out of the pool). I was doing the responsible thing, though. This was about him not drowning.

But now as we enter our third season, I have fantasies about him emulating Michael Phelps, absent the bong hits.

Sure, I want him to be a happy kid, but I also want him to reach his true potential. Because his mother sure as hell didn’t. Isn’t having kids a little like being granted a do over? Don’t you get a second chance through the lives of your children? Long live vicarious parents.

Cut to last week. Pants and I have been excited (read: impatient) to teach Yack to ski. This is strictly a selfish act – we both would like to spend a lot more time on the mountain with our snowboards and can’t do it without the guilt unless the kid comes with. So, we have been implementing a number of tactics to get him into the sport. One includes having him watch some of his cartoonish heroes in the act. “Look, Yack, Go Diego Go is SKIING! How fun do you think he is having right now? Let’s pause it to see the true smile on his face.”

Other coaxing mechanisms that seemed to work are listed below. For those parents who would like to get your kids to be excited about freezing in the snow, please feel free to borrow these suggestions. I take no ownership in them. There will be absolutely no copyright infringement. You’re welcome:

1. The minute he is old enough to walk, take him sledding. Any old makeshift platform will do, but make sure it’s smooth on the bottom and durable. No computer bags or outdoor furniture covers, please. These typically have some sort of zipper or belt buckle that will find its way into the booty. Household items that worked for us: reusable grocery bags, infant bathtubs, trash can lids, or here's a novel thought: get a sled.

2. Don’t pick a spot that’s too steep, and know how to stop when going too fast. I made this mistake by putting a screaming Yack on my lap and hurdling down a very steep mountain side that was highly populated with pines. At the last minute, I had to throw Yack off of me and into the hands of my father as I plunged into a tree trunk, shoulder first.

3. Cover your child’s hands. If his hands happen to get wet, the jig is up. The fun is over. You can pack it up and go home. If kiddo gloves are not readily available, use socks or your stocking cap and wrap a rubber band around his wrists.

4. Have a snowball fight. Let him hit you a few times in the legs or back and then turn around and wallop him a good one right in the head. Make sure that the snowball is not packed too hard and don’t aim for the eyes. This will inhibit his ability to see and he will want to go back inside.

5. Under any circumstances, do NOT call a bib a “bib”. He will think it’s for babies and refuse to wear it. After several temper tantrums in the sporting goods store, we had to convince poor Yack that he wasn’t wearing a bib, but overalls and that they will keep him warm as he plummets head first into the powdery snow.

6. Force his feet into the ski boots. They will seem constricting at first but after he almost collapses of exhaustion from fighting you, ask him to kick something - a garbage can, a car bumper. He will find this amusing and not want to take them off.

7. Tell him that he looks like Buzz Lightyear in his snow outfit. This will increase his confidence and he will think he is flying down the mountain while yelling, “To infinity…. and beyyyyooond.”

These little strategies added up to be the key to Yack’s success. I’m not going to lie. Pants and I were nervous about the potential meltdown. But the work by all three of us paid off. We took Yack to a hill behind our cabin that had about three inches of fresh snow. Pants distracted him while I pulled up his big boy bib and clicked in his mini skies. We carried him up the mountain and told him to point his ski tips towards Daddy. “What are tips?” Oh, right, I forgot we were teaching a three year old.

“The tips are the front points of your skies.” And that’s all the explanation Bode Miller needed before he began shredding down the mountain side. With a smile on his face and his arms out like Buzz, my little boy zipped past me while yelling, “Yee Hahhhh.”

You most certainly are, my sweet boy.
Posted by A Mordant Brown at 4:17 PM