Attack of the Clippers 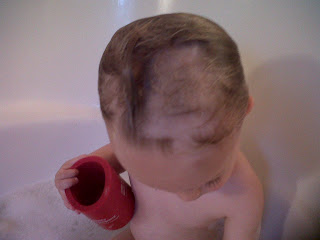 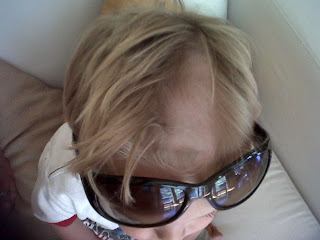 I have some deficiencies when it comes to mothering. I fully admit this having “mothered” two step kids, albeit on a part time basis, and now my own bio child for almost two and a half years, also on a part time basis. Thank God for Nena, caregiver-God Mother extraordinaire. If it weren’t for her guidance, oversight and hand holding, my kid, Yack would be facing some serious therapy in his later years. That’s not to say he still may face life long challenges, considering the fact that I have full responsibility for him in the morning, evening, and weekends. There’s a lot of damage I can do within that limited time frame, and unfortunately, I have exhibited some bad parenting choices well beyond my allotted amount.

Take last Wednesday for example. It was just Yack and Mom for a night that included a dinner consisting of chickenless chicken nuggets, and alligator juice (this is a “pet” term for what I call the pea green vegetable juice – the only legitimate way to get those vitamins in his system). After dinner, we played hide and seek, indoor basketball and air guitar to his favorite song, La Bamba (that didn’t come from me). Pants was away at work on this particular evening and wasn’t going to get home until after Yack went to bed. I was left alone unsupervised with my boy. Some may look at this as eminent danger. I call it bonding.

Up to last Wednesday, Pants and I have made a concerted effort to cut back on frivolous expenses due to the economy being what it is. I now house keep, dog walk, pet groom and garden – chores I would rather pay someone else to do. Alas, this new found frugality has become a small obsession of mine with a few exceptions – organic food, cool art, and my kids’ “immediate needs”. For my step daughter this includes walking around money at Chico State, and for my step son, this includes tuxedo rentals for prom. And up to this point, this also included professional haircuts for Yack.

I had planned on taking Yack in to get a professional trim on that Friday, which would put me back around 25 bucks. This includes tip. This also includes a resentment I have for these strip mall shops that cater to kids with candy, and cartoons during the cut while these kids sit in seats that are made to look like cars or horses or if you’re really lucky a bucking bull. Granted, Yack’s crying is at a minimum as the Wiggles dance before him, but 25 bucks? I would rather pocket the money and take clippers to my kid’s head. In fact, that’s exactly what I did.

It was about 7:30 p.m. and bath time. Yack was getting undressed with my assistance, and his bangs were flopping in his face. I thought about two things as I brushed the mop out of his eyes. One, I can’t wait until Friday to take him in and two, there’s no way I am going to part with 25 bucks to minimize his whimpers. Pants would certainly applaud me for my cost cutting measures. Besides, I had seen Pants cut Yack’s hair on one other occasion with those easy to use clippers. How hard could this be, really?

I ran downstairs – Yack was in a diaper playing in his room totally oblivious to my little one time experiment. I grabbed the clipper box and whizzed back upstairs, singing, “Oh Yack, mommy is going to cut your hair. Do you want a jelly bean?” Candy is the perfect bribe to get kids to do just about everything – something I vowed never to do as a mother. I realized in short order that I am no good at reasoning with a two year old. He wins without the jelly beans. Every time.

He danced into the bathroom ready to be clipped and sat still on the toilet seat. I could go on to describe how he wouldn’t sit still, prohibiting me from keeping a straight edge, but that would be a lie.

Yack sat motionless as I fumbled around the clipper box. There were many different parts which confused me greatly. I didn’t want to waste my time trying to figure out what part went on the thingy that plugged into the wall. So, I picked up the “unguarded” clippers and went for the bangs. I have since learned what a clipper guard is, thanks to my irate husband after seeing the aftermath of my accident.

And yes, it was clearly an accident, which as one can tell by looking at him, that I stopped when I realized what I had done. I giggled in laughter after I butchered my poor son’s head. Nervous laughter. Laughter that royally ticked off Pants. “How could you do this to Yack? How could you think this is funny?” Well, dear husband, I don’t think it’s funny. I think I am an idiot who needs a quick lesson in clipper operation. No, wait. Forget that. I will never get near my son’s head with clippers in my hand, so no need to learn. I will freely pay the 25 smacks next time.

Some have asked why I don’t just take Yack in and shave off his entire head of hair. There are a couple of reasons why I have resisted, none of which have to do with money. First off, the “shave” is too close, as if one were shaving her (or his) legs. Because I did not have a guard on the clippers, the strip on the top of his head is like a baby’s bottom. He would be completely bald if I were to have his entire head shaved to match. And lastly, and most significantly, the comb over that he is sporting right now just might be the new fashion trend that puts Yack on the map in terms of cool. Mark my words.
Posted by A Mordant Brown at 9:12 PM