Annie Get Your Gun 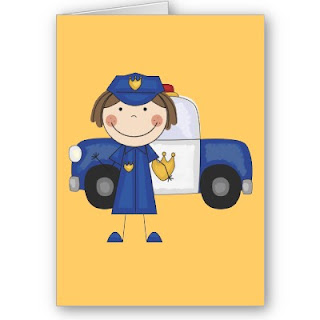 Preamble: I am breaking two codes of blogging conduct. First, I am using real names here, because what better title for a cop named Annie, than Annie get your Gun? Second, I am going to be using some profanity to describe Annie. It’s the only way. You’ll see. I offer no apology.

I met Annie the Cop five years ago. It was love at first sight. During our initial meeting, she fed me copious amounts of red wine and told me about her “beat”. She’s a motorcycle cop in the bay area and has come across some of the meanest snakes around. But when they are confronted by Annie, they turn into crying little whistleblowers – mushy puddles of oatmeal ready to rat out their bosses. She scoffs, “Haven’t these turds ever seen The Band of Brothers?”

Annie and her husband, we will call him the Half Salvadorian have a cabin near ours in the foothills of Gold Country. Pants and the Half Salvadorian work together, although Pants isn’t a cop, he does the easy part – he speaks for them at the Capitol. We spend weekends with Annie and the Half Salvadorian up in the mountains letting the stresses of the week be diluted by the wine we drink. This is where I lean in towards Annie, both arms propping up my chin, hanging on every word. I even try to impress her with my tough girl ways. “I hit a guy in the head with a plastic bag carrying my gym shoes in seventh grade because he wouldn’t let me in the band room.” Annie acts impressed but I know she’s not. She has flattened men who have done worse with just one look. And we both know I don’t have nearly the cajones to do what she does. Although I talk a good game.

Annie the Cop is a badass. She’s got guns for arms and under the smile, she has a side winder stink-eye glance that could make any gang banger run for his mama. She also rides mountain bikes, and even though it’s my favorite sport, I am reluctant to join her knowing that I will not only be eating her dust, but trying to follow the bread crumbs back to the car.

One recent night, Annie shared that she had done several stints as an undercover. I pelted her with questions, teenage-girl-style.

Annie the Cop answered me pointedly: “I was a bit scared. I was busting up a drug-prostitution-bad-boy ring. If I cracked, I was likely dead. Yes, I had backup. Yes, I was wired. Yes, we caught the guys. And yes, I was a little scared. But the worst part about it was the high heels I had to wear. I don’t know how you do it.” She stared down at my feet, as my bread loaves stuffed in party hats throbbed for some relief. I slipped off my four inchers when Annie wasn't looking. Suddenly, those CFM shoes just didn't seem as cool in Annie's presence.

I began thinking about how scared I would be if I were undercover like Annie the Cop. I would probably need to wear a pair of Depends, along with a bullet proof vest, just to drown out the sound of my Tommie Lee drum beating heart. Oh, and truck loads of deodorant for my underarms, my knees, the inside of my thighs. (yeah, pathetic, I know). Ear plugs for the ringing, baby powder for the palm sweats, a hair brush for the massive follicle failure, a psychiatrist for the drugs to help me cope, a dog because I hear those are good for post pardom. In fact, it would be less money and heartache to keep those perps in working rotation instead of having someone like me do what Annie does.

Annie the Cop is rather tolerant of my obsessive curiosity into her profession. But it’s not just “being a cop” that fascinates me. It’s the fact that Annie is a cop. Imagine a woman who doesn’t take shit from anyone. Add a beautiful bod (sorry, but true) face, an infectious laugh, an inspiring marriage with the Half Salvadorian ball and chain, and a personality that almost forces you to try to impress her. And there you have what I call a fascination. Is that inappropriate? If so, I don’t care, because it’s true.

I consider Annie the Cop my friend. I have a goal to get to know her better – I hope she doesn’t think that’s too weird knowing that my mission is purely selfish. I like hearing about how she’s roughed up some a-hole who shoved his fist into his wife’s abdomen. I also like the fact that she packs heat. This somehow adds to her mystic.

I have never asked her if she has been packin’ during our weekend de-stressers when we are shootin’ the shit.. no pun intended. But maybe the next step in our relationship will be for me to ask her if I can see her gun and maybe touch it. I assume that my request is against some police protocol, but it doesn’t hurt to ask.

And can you imagine if she obliges, what that will do to my street cred? I can actually go around to my pansy ass non-cop friends and tell them, “hey bitches, I got to touch Annie’s gun.”
Posted by A Mordant Brown at 8:29 PM