Dorothy's Shot at the Geezer Games 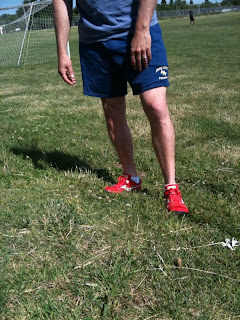 “Child, you're talking to a man who's laughed in the face of death, sneered at doom, and chuckled at catastrophe... “ – Wizard of Oz, 1939

I am living with an Olympic star. I can’t really express how good it feels to be so close to fame. Like it somehow managed to grace me too, being adjacent to stardom. People say that fame is fleeting, transparent. These people have never felt it. It they did, they wouldn’t downplay its toxicity.

It started a couple of years ago. My husband Pants has always managed to squeeze into conversations that he was the greatest discus thrower there ever was (weren’t we all in our sport of choice? Mine was softball, and man, was I the best first baseman who ever set foot on the Livermore High School Cowboy baseball field, just ask me). Pants would throw out terms like, “All American” and “Top Seed” and “Buffed”, but I never paid too much attention because everyone had a story that was similar, including yours truly. I happened to win the Boosters award in high school for sportsmanship and best practice attendance. I do recall some years later that the winning had something to do with the fact that I raised the most money selling $1 dollar candy bars. (Leaving them in the fridge for my dad when he came home from work was a classic marketing strategy on my part, I must admit. After a month, I had submitted my twenty empty candy bar boxes along with a large $400 check payable to the Livermore Boosters, signed with regret from my dear old dad, add to that a $200 root canal and that was some expensive bankrolling back in the 80's.

When Pants began perusing the Internet for discs as a 49 year old, I became a little nervous. I smelled his mid life crisis from across the kitchen, as I glanced over his shoulder at the computer.

I asked politely, why he was pissing our money away, and on what.

“Oh, I thought I would pick up the sport again just for you know, a hobby.”

I imagined that at this point, Pants was grasping for a past that was too good to let go. Like the all star high school quarterback that just couldn’t get over the fact that he was balding and walked with a limp.

Two weeks later, a large box arrived at our front door step which was too heavy for me to open. I left it on the porch for when Pants returned from work. He walked around it for a week.

When he finally lugged it inside, it was covered in dust.

He stared inside the open box.

I nudged him out of the way and pulled out the unexpectedly heavy discs and noticed at the bottom of the box a pair of bright red sparkly shoes staring back at me.

Uh, his order was a mistake. His track shoes were supposed to be black. (Yeah, right, the Internet is to blame for most of the world’s major hiccups.)

“Okay, Dorothy, let’s see what you got!” Yack and I were at the high school across from our house watching for the first time, our patriarch in all of his high school glory warming up for a big throw. I remember feeling slightly embarrassed, like I was watching Chevy Chase taking another run at stand up.

And then Pants flipped around in a full circle and changed our lives.

We found ourselves in Manteca last year with a bunch of old guys. There were runners and javlen throwers, and shot putters and high jumpers. And they were all old.

Technically, you have to be 50 years old to be a Senior Olympic competitor, and technically, Pants was 50 plus two months. Our family must have looked a little out of place with our young son yelling, “Go Daddy” through the chain link but I didn’t care. I was now a full fledged supporter of Dorothy. I wanted him to beat all of these old pot bellies who took this shit too seriously.

And did my Dorothy succeed that day. He came in first place, and was headed to greatness – he qualified for the state championships, “The Pasadena games”. But life got in the way of my man’s goals. His daughter was graduating from high school and we just couldn’t make it work. Besides, how could you justify that? “Great job on graduating, honey. We are so proud of you. Can’t make it to the ceremonies, though. Gotta go toss in the Geezer Games.”

Yeah, not good parenting on our part if we went for it. There would always be next year.

Cut to May 2010. Pants and I skirted out of a political fundraiser early so he could compete in the Manteca games yet again, hoping to qualify this time since no one that we knew of was graduating. And even though we probably should have stayed at the fundraiser as it was a work thing and all (playing golf is such a chore sometimes), we decided to make a run for it. And run we did. We were 45 minutes late, and Pants almost didn’t get to throw. But with a little pleading, and without any practice tosses, they let him compete.

Now you might be wondering how often Pants practiced between the years of 2009 and 2010. Well, let me put it this way – I can count on one hand, maybe.

“See that long haired gray guy with the hunch? That’s my competition. He took “state” last year.” Pants was whispering in my ear as he gripped a Dorothy shoe, stretching his thigh.

“This might be tough.” I could tell Pants was nervous, but I also know being married to him that stress kicks him into high gear and acts as a motivator for him to succeed. Warning: do not try to beat him at the following: ping pong, sprinting, thumb wrestles, or lobbying. He pretty much wins everytime.

Let me cut to the chase here. Pants kicked major boot. He didn’t come in first, thanks to Jeff Bridges, but he did qualify.

As I was packing a suitcase, Pants made the case that Yack and I should probably stay home since I was coming home from a conference in Vegas that evening (ugh!) and we would have to get a hotel room, and Yack is not really plane savvy, (sorry to those who were sitting in rows D, E and F, seats 30-36 on Hawaiian Airlines Flight 2733 to Maui last December), so we decided to stay home and send our good luck vibes to Dorothy via text and cell phone.

I received the following text exactly six hours after he pulled out of the drive way:

How was I supposed to respond to that? He only had four throwing opportunities and I was getting frustrated by his lack of focus. Was he a man or a mouse? This was the time where the mid life crisis juices were supposed to start flowing.

So, I didn’t respond to the text. I figured that I would shower him with unconditional love and affection when he got home and maybe make him a nice meal. I wondered what losers liked to eat.

An hour later, I received this text:

"How much is gold going for these days?"

I called immediately. He answered immediately. And then explained that his fourth throw beat out his competition, that he came in first place. We were headed for the big leagues – the Nationals.

We are all headed to Houston Texas next year, where the National Geezer Games will be heald, and where the dreams that you dare to dream really do come true.
Posted by A Mordant Brown at 10:58 PM