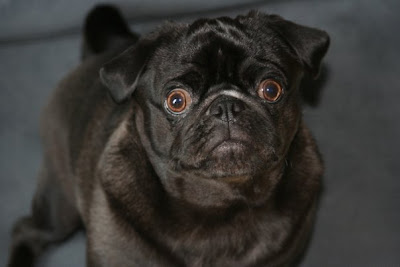 Even my dogs are weird.

I had one named Motagus. Pronounced Mo’ Tay Gus. My dad named him and then proceeded to throw him against a fence when he pooped in the house. It only happened once. My mother threatened to leave her animal abuser husband if it happened again, which created an unwaivering fear my dad had for that dog whenever he happened to be lingering about.

From then on, my dad was relegated to poop patrol, nightly feedings and telling “Gus” what a good boy he turned out to be, this for the sake of saving the marriage. Gus knew he had a pass for life after the “incident” and one could argue, took advantage of the situation . He ate my stuffed animals – gutted them, actually –he climbed on the bed, couches, ate scraps off of the dining room table. Even ate my mother’s beloved bull scrotum purse (see A Really Stupid Gift, June 18, 2011.) He was punished with a good old fashioned rub behind the ears and an “atta boy”.

Gus had a bad habit of approaching company without them knowing, and stelthly placing his unit on their crossed legs, their dangling feet. This didn’t bode well when my mother ran for city council and had her supporters over for coffee meetings. Gus would sneak under the kitchen table and sit frozen against a campaign manager or fundraiser’s foot, panting, hoping not to get caught. Invariably he did which caused my mother to uncomfortably explain that Gus was “fixed” too late in life and she's really sorry for the inconvenience.

I remember when Gus was fixed because I couldn’t write about him anymore in class. I was seven. I had just finished an essay about his large body parts. This is the actual class assignment: 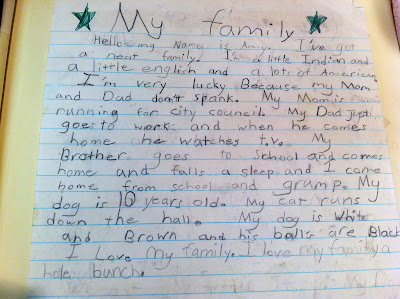 Gus died happy and of old age. We missed him for his peculiar dog ways, for molesting our guests and for teaching my dad that hitting and throwing living things were not okay.

Then we had Misty, the Border Collie who would rather play ball than eat. My brother and I would test her to see if she would ever give up by throwing her beloved tennis ball for hours. We went for half days sometimes – summer was boring in Livermore; it was either test our dog’s athletic prowess or watch Huey Lewis and the News MTV video reruns until our brains throbbed with pain.

After her paws were bloody and worn and the tennis ball was but a fuzzy piece of rubber the size of a nickel, my mother would yell from the kitchen window for us to quit torturing the dog.

Misty developed bad hips but she would drag those hips to chase what we threw at her. The last straw was when I threw one of my brother’s “action figures” (read: dolls) for Misty to retrieve. She returned it while dragging the second half of her body back to us for another toss.

Then there was Max. I bought his pure bread highness for more money than I had shortly after I graduated from college and moved into my own place. He was a black pug with a sinus problem. He kept me up most nights with his snoring and he wasn’t altogether potty trained. He crapped in my roommate’s closet several times. I was grateful for this because my roommate was a little messy and didn’t find the poop until it was dried and pushed aside by her big clown shoes. Another blessing – my roommate had skiis for feet. Her bigfoot shoes covered Max’s doodies quite well until they were hard enough and thus, didn’t leave any smelly remnants behind on the carpet of our rented house where the security deposit was vitally important for when the house got too stinky and we had to move.

Come to think of it, I don’t rightly believe Max liked my roommate all that well because he never seemed to soil my room and I recall a few times where he took the opportunity to climb up on her bed and pee on her freshly clean sheets. Perhaps the warmth of the sheets made him want to pee, similar to the adverse effects of warm bath water.

I learned a lesson from Gus that I applied to Max. As soon as he was old enough, I made an appointment to get him fixed - whacked, as it were. I happened to impulsively mention this to my father in one of our “how’ve ya been?” conversations.

Me Pops was mortified.

In the days that followed said conversation, the old man left me thirteen voice mail messages. Let me clarify. They started off addressed for me. When I refused to return the calls, they were aimed at Max. The messages went something like this:

Beep: “Amy, how could you do that to such a spunky, smart sweet dog? He won’t be the same.”

Beep: “Amy, it’s dad again. How could you make my granddog a nutless wonder?”

Beep: “Amy, if you know what’s good for you, don’t take this dog’s manhood away. Remember what happened to Gus?”

Yeah, he leg humped our guests.

Beep: “Max, this is your grandfather speaking. If you can hear me, run for your life. Just find an opportunity when your mother opens the door for pizza and skedaddle out the front door.”

Beep: “This damn answering machine must have cut me off. Max, I will be waiting for you at the end of the street. Ruuuunnn.”

Beep: “Max, did you get my last message? Bark if you did. Or crap on the kitchen floor in protest. Don’t let her do this to you.”

If those messages didn’t seal the deal, nothing would. So I took the bastard in at the first available appointment. And when we pulled up to the vet’s parking lot, in true form, he peed all over the passenger’s seat. The only solice I had was that my roommate usually rode shotgun. I would keep this little secret from her.

As I signed the papers and payed the astronomical fee to have these little gems plucked – can’t you just tie a rubber band around them and wait for them to fall off? – I asked the receptionist if anyone has ever kept the testicles once they are removed from the dog.

Apparently, all the time. She responded as if I were asking for routine flea medication. She made me fill out some additional paperwork and said they would be available by the time I picked Max up.

Is it bad to admit that I was more excited to pick up the specimen than the dog?

The little meatballs appeared in a jar full of formaldehyde with a label that read, “Specimen: testicles. Patient: Max.”

This was the coolest thing I have ever owned, and that included the full suspension mountain bike on which I splurged impulsively the same year I bought Max.

I stared at the nuggets for the longest time. Not excessively long, though, that would be weird.

Max was sedated, and pleasantly calm in his pet taxi which allowed me more time to examine these little octopi.

My roommate thought I had lost my mind especially since I used them as a centerpiece on our kitchen table. Not for long, though, I had other plans for Max’s peanuts.

Christmas, 1997, I found a little box in which the balls fit perfectly. I tied a bow and headed to my folks for dinner and gift exchanges. Hardly able to contain myself through dinner, I rushed through the meal to proclaim that it was gift giving time. And I was destined to go last, which almost became the death of me. My patience was wearing thin while I sat there through unwrapped china plates, new baseball gloves, scented massage lotion. Borrrrriiinng!

And as if time stood still, I asked Dad to reach under the tree for that last little gift.

“Especially for you, dad, from the heart.”

He tore the box open and held it to the light. He squinted to read the label. The next verbal exchange is not for public consumption. After his bombastic verbal vomiting, my Pops broke out in song,