The Force Of Nature 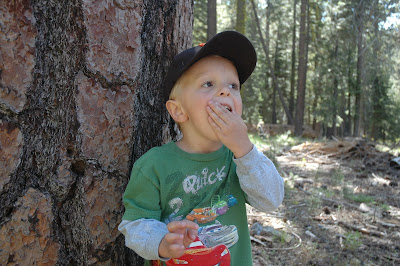 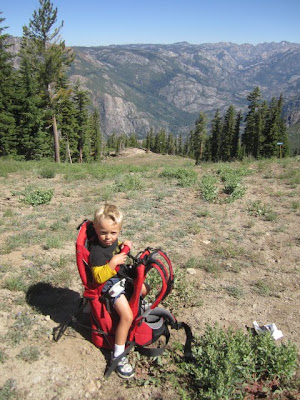 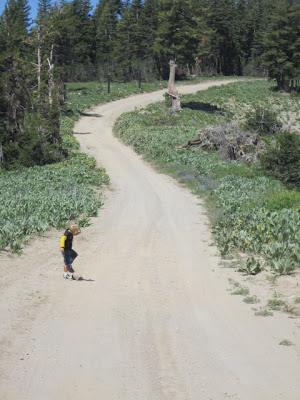 One of my greatest pleasures is hiking in the mountains – the cool, clean air, the fresh pine smell, the blisters like little badges of honor. When I gave birth to Yack, I was destined to not let this little bundle of joy take away one of my favorite pastimes.

At first, hiking with the little man was easy. I plunked him in one of those baby bjorns, threw my hiking boots on and charged up the hill. After five minutes, the rhythmic bouncing of my stride rocked him to sleep and I was at peace with a baby boy who was subconsciously appreciating the same sounds and smells as I was.

This went on for a good year.

And then overnight, my one year old turned into a three year old. And he didn’t want to be strapped into a bjorn, or any other suspension devise. He didn’t want to hike at all. He broke my damn heart by wanting to watch Sponge Bob instead of hiking. Was this kid even mine?

But as any good parent would, I forced him. Fresh air should be mandatory. Exercise should be required. Talking about the beautiful surroundings should be a part of one’s own moral fabric. I was destined, forced, to shape this kid’s psyche.

Even if it made him hate me.

The hikes thereafter were memorable, alright. They consisted of crying, tantrums and clenched teeth. Looking back, I am so ashamed of how I behaved.

I began to hate hikes.

One of the options was to drop him off at a sitter’s and trudge on without my little offspring, my sidekick. But knowing that I only spend limited time as a working mom with the little man, I didn’t feel right about leaving him while I enjoyed nature. Plus, I had to capitalize on the time when I had positive influence over him, not to mention influence over his English language. I vividly recall one hiking highlight where he picked up a large tree branch, jabbed me in the gut and said, “mama, mira, una pistola,” to which I retorted, “that’s not a gun, Yack. It’s a stick,” to which he replied, “ah, un palito”.

These are the moments that make me realize he is spending too much time at Nena’s, not that there’s anything wrong with that.

These hikes were my lifeblood. I had to think of something fast to comingle my son with that I thought was a mandatory educational experience, nature.

So, I did what came naturally. I bribed him.

First off, there’s only so much trudging up the hill I can do with him strapped to my back, and since my child toting backpack only allows for about a 25 pound kid, we are well over our max. So is my back.

This recipe for success may be criticized by my well read “PC” parental friends; to you I say, I don’t give a rip about your opinion right now. All I know is that my kid and I are at the top of Bear Valley so go pound sand.

Here goes: I take a large zip lock plastic baggie of Gummy Bears, which I usually replace with those organic fruit pieces. He’s three. He can’t read. He doesn’t know the difference.

I put these little nuggets of gold in my pocket and as if I were Hansel leaving a bread crumb trail. I explain to Yack that if he just make it up to that big tree log at the top of that bend, he will get two.. yes, two Gummy Bears. I may even pull them out of my pocket to show that I am serious, letting him follow his nose like Toucan Sam.

And then he runs, no, he bolts of the hill, with candied treats on the brain. He is usually at the tree before I am, hand out, waiting for his reward.

I am pleased. I like hiking again. But this feeling is fleeting.

But we have only gone 100 yards. I offer more Gummy Bears until he is completely comatose on a full blown organic liquid cane sugar rush.

I ask Yack if he’s thirsty. And I question which way my moral compass is pointing if I am withholding water from my child as an incentive to soldier on. I have only mild regrets when I say the following, “you can have water, Yack, when you reach to that second redwood right above that ridge.”

And then he starts to sprint, with what is likely a mild onset of dehydration.

But I am enjoying hiking again.

When Yack has finally had it, he faces me, pink cheeked, sweaty, pleading for me to pick him up the rest of the way.

“Why don’t you get in the backpack?”

It’s too small for him, he explains. It’s for babies.

And it is. But I give him a choice: walk, or get in the backpack. (Leg cramps? He’ll get over them. I will be the one suffering from carrying him, no?)

He chooses the backpack. His legs flop well over the foot rests. His shoulders peek way over the top of my neck. He has undoubtedly outgrown this thing, but how else am I going to hoof this 35 pound ball of three year old muscle down the hill? I ain’t gonna pick him up, that’s for sure.

And so it goes. He sees a bird here, a lizard there. He wants to get out of the backpack five minutes after he is in it. I bribe him to stay in. “If you stay in the backpack, I will give you more Gummy Bears.” He says no. He starts resembling a Gummy Bear. Perhaps it’s the delirium I am experiencing as I struggle to put one foot in front of the other.

This punk is heavy.

As luck would have it, we reach the car. We’re exhausted. By the time we are done, he has gotten into and out of the backpack at least a half dozen times. It takes us twice as long to go half as far. He’s seen the requisite things I would like him to view on a hike – the birds, the large trees, the mountain monsters that live in the “jungle”.

We dust off and get into the car. Yack says he wants to watch Sponge Bob on my iPad. I hand it to him without saying a word as we drive off.