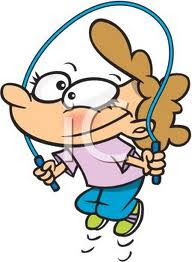 There are many things I have resolved not to do – most of them predicated on the fact that I simply can’t do them. Take running a marathon. That’s a nonstarter because my old man knees and webbed duck feet will give out on me on mile fourteen. I know this for a fact - I have actually made it to thirteen before my feet ballooned up like Grandma Vera’s. It didn’t go well when a couple of days later, I had to go to work.. I tried putting on my high heels. It appeared as though I attempted to stuff bread loaves into little party hats. And my knees merely couldn’t hold up that kind of pressure.

Spelling bees are also out. I have to spell check words like squirrel, rhythm, and weird. Trivial Pursuit is out too until I am 80 years old and can only pick the pop culture option. I’m a dummy on the fartless facts front. For instance, ask me where Cyprus is and I will likely tell you it’s a music station as opposed to a country in the Eastern Mediterranean.

Oh, and I will never skydive. Messing one's drawers at 10,000 feet in the air just doesn’t seem like a very good character builder.

Double unders were also on my “do not do” list too and for good reason which I will get to; that was until my ego got the best of me and I impulsively challenged a sweet, getting-into-shape unassuming 13 year old boy to a duel of sorts.

Blame it on my ego, or my father. But I've got a little swordfight on my hands.

Before I get to how I poked baby bear in the snout, let’s get to what these dreaded little physical challenges are and why I refused to do them.

Double unders, ah yes, think regular jump ropes on steroids. Instead of swinging the rope around one’s head and jumping to somewhat of a tempo once the rope nears the feet, one must circle that rope around the entire body twice before landing. That’s right. This is known as the elusive and un-teachable act of jumping one time per every two swings around the feet. I’ve seen it done but only by elite and exceptionally coordinated athletes at the Torture Chamber known as the Midtown gym. I have also tried it, almost repelling my head into a brick wall after my feet got hog tied in the rope. This unfortunate incident happened twice. Perhaps three times. Not so cool looking. Not to mention it took me years to master the patting head rubbing belly move. This seems way more complicated.

The most daunting aspect of this tangled mess, aside from receiving permanent facial scars from rope lash, is the sound. The jump rope is whipped so fast, it sounds like a 70 mile an hour wind tunnel on the top of a mountain range. Of course, I couldn’t make this sound even if I tried, but again, I have witnessed it and yeah, it's scary.

It’s pretty understandable that the double under was filed into my “do not do” folder for the sake of public humiliation, and also my life.

Back to how I am planning to crush this punk kid.

So, there’s this new trainer at the gym. We call him Irish Ed. He can whip up several double unders without breaking a sweat. I am unclear as to where he learned this skill, but if it was back in Ireland, I’m glad the double under isn’t an official Olympic sport or we Americans would be SOL.

Out of the kindness of his heart, or maybe the need to curb his wincing from seeing me try, Irish Ed has taken it upon himself to teach me how to master the double under. I have publicly given up on it about five times, not shamed to declare defeat. Again, there are some things I am just not cut out to do. But Irish Ed thinks I have potential. He apparently thinks that 13 year old kid has potential too because right after I waved my hand in Irish Ed’s face and told him to go coach someone else, the Kid, under Irish Ed’s tutelage, did a double under right in front of me.

I can’t sleep at night with that on my conscience.

I asked the Kid if he had any money to his name.

I said, “well find it, kid, because in a month, you and I are going to have a double under off and I am going to take $20 from you.”

And now it’s game on to see who can do more.

Problem is, Irish Ed is coaching both of us and Kid has a leg up. I may have to call foul and point to “favoritism by coach” if I happen to lose.

Problem #2: if I win, I appear to be a jerk for picking a fight with a kid and strutting around thinking I am the cat’s pajamas for beating him. And if I lose, well, that’s just pathetic.

So here I am, feeling regretful for opening up my egomaniacal mouth and deciding that something on my “do not do” list should be pursued because some punk kid can do it.