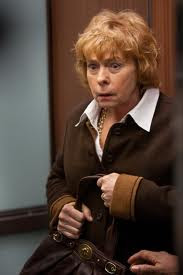 There was an incident recently in an elevator. I was at work. I was making my way from one floor to the next in the state capitol. I was lobbying. I was trying to convince law makers to vote a certain way on specific legislation.

It was during this one innocent little elevator ride where my mind went from an analytical, focused, politically charged bullet train to a crazed maniacal food fighting mess hall.

In a scrupulous attempt to make eye contact and small talk with my fellow elevator patrons, I caught the glimpse of someone of whom I had seen before. This wasn’t a fellow politico. This was a T.V. face or someone I had seen on the silver screen. But I wasn’t altogether sure. Perhaps I had seen her on a mail hit piece for a campaign, or in my bookmarked favorites on the Internet. I did what came naturally. I stared at her.

I also eavesdropped on the conversation she was having with her entourage to see if I could pick up on some hints.

The woman spoke. “I think that gentleman back there recognized me.”

And that’s all I needed to hear to capitalize on an opportunity and solve this little mystery. I faced her eyeball to eyeball and proclaimed, “Well, I recognize you too. Are you quitting the acting gig and moving into politics?”

To which she replied, “No, my dear. I am doing both. I am here to help our SAG union members.” (SAG is the acronym for the “screen actors guild” for those who aren’t in the biz, FYI.)

Aha! I knew it. She was an actress and one that I had seen a million times before in movies… or was it T.V?. And if you give me a minute, I can name what she’s been in.

Just give me a minute.

Due to pride and the timing of our elevator visit, I didn’t ask this actress, who looked a lot like Shirley Maclaine, what she had been in. I thought that would be rude and would show what a terrible spectator of pop culture I was. It was as if I wanted to give this stranger the impression that I was completely down with her career, and even came across as a devoted fan.

Besides, someone in the Capitol had to have run into her and picked up her name. I would therefore be able to answer the rest of my questions through a private Google search... what the heck has she been in?

Strategically, I used my work to sneak in a few frenzied inquiries. “Hi, Senator, please vote no on this nonsensical piece of legislation and by the way, did you run into an actress today in the Capitol? Why, you ask? Because I know I have seen her on something and it’s just killing me that I can’t figure it out. What has she been in? Well, I am not altogether certain. Perhaps a T.V. series or a movie. I can tell you one thing, she looks an awful lot like Shirley Maclaine. Have you seen anyone like that today? No? Okay, well thanks. And please vote no. Oh, and don’t forget to ask your colleagues if anyone matches that description.”

Was I a lobbyist or a CSI detective? I started embarrassing myself.

What an idiot. Let this go.

But I couldn’t. I began a furious texting campaign. Alert, Alert. Anyone with any information on an actress who was in the Capitol today, please notify me immediately.

I wondered why I was so crazed about solving this mystery, because really, on the grand scheme of things, who gave a crap?

I did. It started affecting my already unsteady mind.

I started having flashes of this woman. I closed my eyes and played out scenes that she had been in, asking my memory bank to send me any clue - was it Phenomenon with John Travolta? Was she the replacement to Ms. Garrett in Facts of Life? Was she Roseanne and Dan's neighbor?

That night on the way home, as I painfully focused on this mystery woman, I came to the conclusion that she was on Big Love. No, ER, that’s it. Or was it Six Feet Under? How about the movie Breakable with Bruce Willis?

Something in my brain always took me to the obscure semi creepy shows. So I did what came naturally. I started a Google frenzy. Here’s what I searched which was a complete time suck – I am ashamed to admit it’s two hours I will never get back:

Actress lookalike to Shirley Maclaine (I googled this three times)

Redhead actresses (there is an actual website dedicated to all beautiful redheads in Hollywood. Problem is, the pics portray young 20 somethings. This woman was slightly older than that.)

Shirley Maclaine looks like this actress (thinking that this would be different than the first entry).

You may be thinking that I have better things to do. This is a fact. I had to put my sweet son Yack down for bed. I had to pay some attention to my husband, Pants. I had to get my head in the game for tomorrow’s Capitol brawls.

But none of this happened.

My last resort was Facebook. I posted the following as my status: I am going nuts trying to figure this out. Ran into the actress today at the capitol who looks just like Shirley MacClaine. She and I chatted but I was too proud to ask her what her name was. Please, anyone, let me know who she is or I will lose sleep tonight.

I received 66 responses, which included such entries as: “was it Lily Tomlin?”

Come on. Does Lily Tomlin have light red hair and look like Shirley Maclaine? No. Please. I know who Lily Tomlin is and I would bow down and kiss her feet right there in the elevator if it were her. I mean, really, who didn’t see The Search for Signs of Intelligent Life in the Universe?

And then my Facebook community really started to let me down with responses such as: Bo Derek, Charlotte Rae, Carrot Top, Shirley Maclaine – are you sure it wasn’t her?

Don’t get me wrong, I was very appreciative of the 66 responses and accompanying support, but help me solve a problem, for the love of…

I dreamt about my mystery woman that night. I saw her in a court room. She was a defendant. She was crazy. Too bad I didn’t dream about who else was in the court room. Their faces were all smothered in Vaseline. My mind was playing tricks on me. My mind was the court jester.

I woke up pissed.

I had to find a way to put this behind me for the sake of my family and my job. I grabbed my phone and began re-texting everyone I knew. “Dammit, I deserve this. Find out who this mystery woman is STAT.”

I showed up for work the next day actually worse for wear. Eyes bleary. Head foggy except for the actress’ face clear as day, taunting me with her flirty, patronizing eyes.

Go away, I don’t care anymore.

I arrived in the halls of the Capitol with the firm commitment to not think about Mystery Actress. That is until many people swooped down upon me, “did you find out who it was?”

No, and I lost sleep.

That’s the thing with Facebook. My problem becomes your problem. Very comforting, until you want to forget the obsessive nature of your mind. And so I was reminded..

“Oh hi, I was thinking it might be Cloris Leachman?”

“Was it Sofia Loren?”

“I have been thinking about your dilemma. Did you find out which offices she was visiting?”

And just as I was about to throw in the towel and seek psychiatric help, I saw the SAG lobbyist.

“I will pay you a lot of money if you can tell me who the actress was who happened to be wandering the halls of the capitol yesterday.” – Eww, I sounded like a crackhead.

Excuse me? I lost sleep over a woman by the name of Jenny O’Hara?

I began to shake between the time this sweet lobbyist guy uttered her name and the time I pulled up my iPad to search her image. (only thing an iPad is good for).

And there she was. As if we were back in the elevator having our brief but meaningful encounter.

There you are, Jenny O’Hara.

Now the real question had to be answered, why was I so obsessed? Why the reaction? Why the dust up? I searched the Internet Movie Database and read her filmography history.

And then it hit me. I had recently watched a movie called Devil where a group of people find themselves trapped in an elevator. The Devil is amongst them and the lights keep going out. Each one gets creamed during the course of the movie. The premise seems rather sophomoric but to tell you the truth, that flick kept me up for two nights straight. It’s bloody. It’s heart pounding. There's brutal death. And, (warning, spoiler alert) that crazy Jenny O’Hara had something to do with it.

That blasted movie had caused me to have photo flashes of Jenny O’Hara’s character in the rear file cabinets of my brain ever since.

And get this. It was written – not directed – by M. Night Shyamalan. Now, how does my subconscious know this?

Let me tell you, it doesn’t. It was just scared shitless seeing Ms. O’hara in an elevator.

I’m just glad I got out of there alive, and fully understood later who I was dealing with.
Posted by A Mordant Brown at 11:50 PM