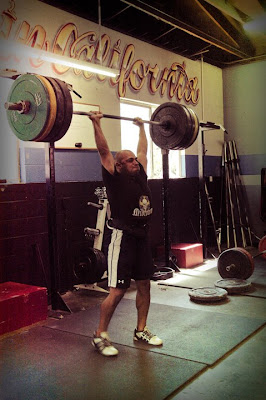 It’s coming up on a year since I started frequenting the Torture Chamber. I shoulda quit when I had the chance – when I finished the Tough Mudder race last October and lived to tell about it. That was one opportunity. The other was when I threw my back out picking up a barbell “like an idiot”. I was out for an entire week and would have felt justified if I never returned. Or when budget negotiations were steaming up at the Capitol and I didn’t have time to even eat, let alone peel away for a butt kicking. That’s, let’s see.. three times at least within the past year that I could have easily said, “See ya, Midtown. Good riddance. Nice knowing you and your stinky kettle bells.”

But I keep returning.

I hope it gets easier.

I search for a day when I walk out of there thinking, “hey, what do you know, I don’t feel like my breakfast is going to come back up and land in the parking lot.”

And that’s why I continue to go. To one day say that I not only survived Camilo and his ridiculous sandbag throwing, dumb bell raising, sled pulling workout, but that I also did something relatively productive afterwards.

I’m not real bright, I'll admit. Case in point: every two weeks or so I dare myself to survive a little one on one training session with Camilo. This is after three days a week of his group class. I do this not because I don’t get enough during the classes, I simply want to see if it’s any easier than the last time we met eyeball to eyeball, barbell to barbell.

Well, one of two things is happening. Either I am not improving, or he keeps quietly ratcheting it up on me. I can’t tell either way.

That’s because Camilo is quiet. Uber quiet. Sometimes, I have to strain to hear him and the only way I can tell if I am being a good student is if I get the obligatory fist bump. I like the fist bump, also known as Fo’ Knuckles. Getting the Fo’ Knuckles makes me feel super sweet, like I could probably hang with Camilo and his old baseball teammates from college without them thinking that I am a dork tomboy wanna be. Yeah, probably not.

This past week was an especially humbling workout with Camilo. That’s because my ego was bigger than my mobility. You see, I may have bragged a little to a coworker friend of mine about how he probably couldn’t survive one of Camilo’s workouts. He just started at the gym because he is doing the Tough Mudder race with me this year (yep, not too bright). And I mentioned that having alone time with Camilo is not only reserved for veteran Tough Mudders but also for those who have strong inner strength. I was basically calling my friend out as a pantywaist.

My friend reluctantly decided to join me.

“Okay, Tye, but I have to warn you, throwing up is okay, quitting is not.”

He gave me his “whatever, bring it” look and away we went.

Camilo was already preparing for us when we showed up, buzzing around in fast forward. Tye looked apprehensive at best. I think he even whispered to himself that he wasn’t ready for this. I approached Camilo and gave him a friendly shot in the arm. Perhaps a little non verbal sign that I was bringing my A game today and my buddy Tye was there to try and keep up.

Camilo then picked me up, put me on the back of his shoulders and squatted me five times, just like that.

Uh oh. As I was being swung in the air, I started having some doubts. Camilo was onto my inflated ego.

We started off the hour with “squats” and “clean and jerks” and finished off with several sets of “snatches”. (I often wonder about the guy who made up the names for these moves.. and yes, he was most certainly a guy.)

While Camilo was working on Tye’s form, I stayed steady with my reps, hoping that if I finished before I was noticed, he wouldn’t add more weight to my very comfortable barbell.

Grab those 25s over there, Brown.

After a few of those, I felt blood vessels popping in my face. I wondered if they would be permanent. Does Botox fix perpetual eye bulge and varicose face veins?

He kept telling me to keep my heel down and my knee out while I pounded out my reps.

I reminded him that I have a club foot and have some limitations in what I am able to do.

He shrugged. “I don’t see any limitations. Just keep your heel down and knee out.”

Apparently, there’s no room for pansy-ass excuses, so I kept my mouth shut (very challenging) and did what I was told.

Tye, on the other hand was making me look bad. He was dead lifting like it was Christmas.

You just wait until we get to the conditioning part, Tye.

Next, Camilo had us do burpees. Fifty of them. If you know what a burpee is, you feel bad for me right now. Camilo showed Tye the proper form since he was unfamiliar with the movement. Camilo jumped in the air like a flying squirrel, landing on feet and hands, knocked out a pushup and then shot in the air clapping his hands overhead. Burpees are dreadful. Don’t try them at home.

After thirty burpees, I wanted to hurl. Tye was sweating enough to fill a water cooler, but he was keeping up. This pissed me off. Tye was supposed to have collapsed by now, with me doing my last set of burpees over his dead body.

Camilo then made us to sled pulls along the wall of the gym. Next, he made us do medicine ball slams – too many to count. Then he told us to get a set of kettle bells. I went to pick up the 44 pounders - my comfort zone. Camilo took them out of my hands and handed me the 62ers. I let them fall to the ground as my shoulders about fell out of their sockets.

He told us to go outside and start walking. Chest out. Holding the boulders from hell in our brittle aching fingers. He told us to walk to T Street – a half block away. Tye and I exchanged “I hate you” looks. He hated me for getting him into this. I hated him for keeping up.

I couldn’t make it to T Street. My arms felt like they were being pulled off. Tye stopped too. I don’t want to know why.

Camilo asked if we needed a short break.

No, we’re standing here because we like the way that orange tree glistens in the sun.

“Well, we might as well make the most of this time. Ten jump squats.”

How about ten kiss my butts, Camilo? How about that?

Tye and I realized in short order that every time we stopped, we would have to perform these excruciating leaps. Not to mention how imbecilic we looked to the passersby.

We suffered through to T Street. Camilo said we were now to walk to S Street. I wanted to take the kettle bell and put it in his mouth, but I couldn’t lift it past my hip.

You’re lucky, Camilo. One of these days I will be able to reach it to your head.

After five sets of jump squats – yeah, do the math, that’s five breaks – we made it to S Street. I placed my kettle bells down with authority, elated that we were finished.

That is, until I realized that these hunks of metal were somehow going to have to get back to the gym.

Camilo, you have a truck, right? We aren’t taking these back.

Camilo just smiled and told us that he has a surprise waiting for us if we get these kettle bells back to the shade. The shade, my friends, was only 10 feet away. I love surprises. I imagined him having a Snickers bar in his pocket. Or maybe he was going to offer us a cold glass of what my son, Yack refers to as aqua de limon.

“The surprise” happened to be ten sprints up and over the hilly lawn. Camilo stood at the top, egging Tye and me on to go faster. “It’s Tough Mudder season. Let’s go, let’s go, let’s go.”

After the sprints, I refused to make eye contact with Camilo. I took my boulder sized kettle bells and sprint walked back to the gym. And yes, Tye was right there with me. I couldn’t shake this knucklehead. He was like a bad penny.

When got to the floor of the gym, we rolled out our backs and shoulders with Styrofoam tubes. Camilo approached both of us with his Fo’ Knuckles. Tye put his hand out to show me he was shaking. He was speechless.

Good, he got Camiloed too.
Posted by A Mordant Brown at 3:17 PM