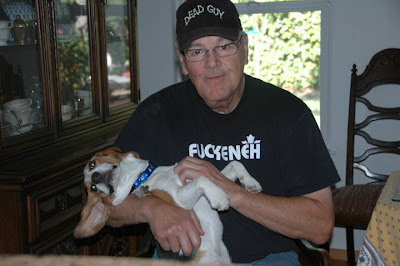 There are many ways in which to describe my father. He’s big. He’s pretty funny. He’s resilient. Very loyal. And competitive. Obsessively so.

Most of his qualities – good, bad or indifferent – rubbed off on my brother and me. We also unfortunately acquired his unhealthy competitive nature. As adults with our own children, my brother and I realize that we too would rather win than improve the egos of our kids by letting them enjoy a small victory. We must actively go against the forces of our own nature so as not to instill the offensive overdrive into our young and impressionable toddlers.

That’s right, as my father’s daughter, I have come to terms with the fact that my bloodthirsty quest for victory is a direct link to his parenting skills, and if I am not careful, this perpetual cycle will see no end. I resist the urge to follow in my father’s footsteps and go all gonzo on my offspring.

Admitting it is the first step to enlightenment, no?

My father is a winner. In fact, he’s never lost a game; not to his friends, his parents, his arch enemies, his children, his wife (with one minor exception which we will get into). He’s that dad you could never beat no matter how hard you tried. Even when my brother and I crafted our skills to be better than him, we never conquered him. It’s because he would rather cheat his kids than lose. I am convinced beyond a reasonable doubt that he would rather lose his dignity than a game. Baseball great George Brett from the Kansas City Royals once said it best and I believe my father would agree: "If a tie is like kissing your sister, losing is like kissing your grandmother with her teeth out."

To prove my point, let’s begin with a short and partial list of the games in which he has never lost:

One of his favorite expressions in the racquetball court after slamming the ball in our backs:

“This is a tough sport, kids. You have to be tough to play tough.”

So why didn’t we just up and quit?

And apparently, character is something every child needs in order to grow tall and not get picked on at school. I wanted some character, so did my brother. So we hung in there until it was dark, or way past our bedtime, or wobbly and weary eyed.

This character building, as we had come to learn, was another term for doing everything humanly possible to beat the opponent. Cheating was not necessarily frowned upon, but getting caught was. Flipping the game board if one was legitimately losing, now that was considered okay behavior. Technically, it wasn't quitting. It was merely a hiccup, a do over of sorts.

Aside from cheating and throwing tantrums, there are a few other strategies that I feel compelled to share here, because they served me so well in life. They are as follows:

Game: Ping Pong
Strategy: Lick ball when opponent isn’t looking. Put a lot of spin on it. Slam opponent in the face so if it doesn’t hit table, opponent will be too blind to see.

Game: Horse
Strategy: Continue with the easiest lay up in the same location until opponent cannot hold ball over head any longer. This may be coupled with constant ribbing during shots. Warning: the game will likely drag on for hours without a miss. The challenger with the most endurance and height typically wins.

Game: Racquetball
Strategy: aim that bouncy blue ball right in the back of opponent as hard as possible. This will create a semi permanent donut shaped bruise and will inhibit opponent from gaining leverage. (It should be noted here that when we would play with my father, he would “teach us a lesson to get out of the center”, which required us to run all over the court. He, on the other hand, would stand in the same place during the entire game aiming the ball at us. Instead of playing racquetball, we played a modified version of dodge ball. Racquetball is supposed to be a great workout, but my dad didn’t lose a pound, even as the undefeated champion at our neighborhood club for two straight years. You can't get in shape if you stand in one place the whole time.)

Game: Trivial Pursuit
Strategy: This involves some handy work. Pick the card up out of the pile backwards, take a quick gander at the answer on the back of the card, memorize. Look like you are straining to think before blurting the correct answer. Look surprised at getting it right.

Game: Swimming
Strategy: Kick wide and don’t swim straight. The goal is to swim into your opponent, causing slight panic and confusion. Must be made to look like an accident.

Game: Darts
Strategy: having a very large and flexible torso helps. Lean as far as possible with toes well over the line. Act like you’re falling before throwing the dart. If this doesn’t work, heckle during opponent’s turn.

And if all else fails, throw whatever is in your hand – cards, play money, golf clubs, racquets. This will end the game immediately without anyone being declared the winner. This is known as a hung jury and another game will soon follow with slates clean.

This is how I grew up. This is what I learned from my father.

Well, the dysfunctional obsessive need to win didn’t stop with the games. It could be daily routines.

Eating: “Are you going to have that last French fry?”

If I didn’t eat my food fast enough, I’d lose it.

Driving: "I bet I can spot more words with letters that begin with S than you can. Ready go. “STOP! Street Crossing! Subway! Santa Cruz! Slurpee!"

Watching television: “I don’t want to watch Three’s Company. I want to watch Cheers. Where’s that remote control? I had better find it before you do.”

This invariably led to a mad scramble amidst the couch pillows, shag carpet, coffee table. Crying. Something breaking. My mother yelling.

Doing chores: “You better pick up the dog poop faster than I wash the dishes.”

And the most annoying part of losing was his ridiculous victory song. Chest puffed, biceps pumped, singing to Queen:

I never quite understood his need to beat small children at physically and mentally straining sports such as wrestling and word games and eating, but I recognized his pure pleasure in winning, which made me wish for someone to take him out.. Someone, anyone, needed to knock him on his knees. Do it for the children.

There simply was no stopping the insanity, and as personal quests go, it became an obsession of mine to get good enough to beat him at anything. I focused my efforts on ping pong. It was the only game that I could practice day and night with one willing participant. That was my mom. She always encouraged me to find a hobby. I told her that my hobby was trying to beat dad. She supported this. We played a lot. We played in the morning before school. We played after soccer practice, before bed.

Before long, my hobby became her hobby. She got good.

The ping pong games that my parents played were more than silly recreational occurrences, they were full contact sports. They typically ended in the dark, in tears or paddles being broken. These were not enjoyable times, watching the two of them battle. And why did my mother continue to play with my father? Because she knew that someday she would actually beat the bastard.

With one game, my mother leveled the playing field ad infinitum. My father would no longer be immortal; he was now just one of us – a normal person who loses a game once in awhile and then takes out the trash.

This is how I remember it: I had a couple of my high school friends over as we lay by the fan playing video games in the living room. It was nearly one hundred degrees outside and we were miserable. I assumed my parents were in full battle mode in the backyard because I heard the shrieks coming from the patio – a typical occurrence. I ignored the hollers for awhile, but they became so distracting, I peeked into the backyard to see how badly my father was beating my mother.

And there she stood almost completely naked with just the paddle in her hand, jumping up and down (my eyes, my eyes) in excitement because she was winning.

My mother’s clothes were wadded up in the corner of the grass.

Like watching a car accident, I couldn’t look away. With every point my mother scored, off came another article of clothing until she bounced freely like a front row groupie at a Kiss concert. Under normal circumstances, I would have been still with fear knowing my high school friends were within eye shot of my mother’s bare boobies. But this was different, my mother was about to beat my father in a game. An actual game.

I called for my brother. “You have to see this now.”

We all knelt down, eyes fixated on the game, petrified that if my mother didn’t win, our lives would be ruined. I couldn't breathe. All of us stared in awe; my brother and I giddy with slight possibility of triumph, not concerned with what Naked Mom would do to our reputation at school.

And then she won. And aptly gloated. Arms in a bicep curl, strutting her victory around the table, not minding at all that she had eye witnesses.

My father retreated to his garage where he put his Chinese custom made ping pong paddle on the top shelf where it still sits unused to this day.

The aftermath was blissful, but short lived. My father still challenged us kids to competitive nonsense, but with far less fervor. All we had to do was remind him that he lost to an old naked lady, which put him in his place ever so slightly.

Of course, word got around school that my mother was a peace loving naked hippie, but once the story was explained as to why she did it, most kids who knew my dad thought that the expose’ was a tiny footnote in his defeat.

It was something that had to happen.

And so when I have the slight urge to jump up and down after beating my three year old in Candyland, I suppress those feelings, knowing that if I feed the hunger, I too may find myself racing his father at the track and field in nothing but my skivvies.
Posted by A Mordant Brown at 1:59 PM