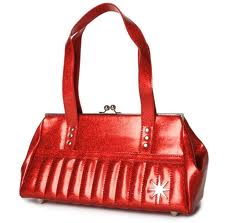 The Brown men in my family don’t do well with macho. They are more your garden variety feelings type – talk about it, hug it out.. especially my brother. Growing up, that kid could cry over a sad song, a ripped shirt, a mild pinch in the arm to establish territory. I am convinced he learned this soft demeanor from my father, who cried quite a bit too. And so it seemed the touchy feely self expression was a prerequisite for being a Brown male. Sweet, huh? Most of the time it was, but every once in awhile, that sensitivity came with price.


“What the hell is your son doing?”


Mr. Shiteed nudged my father in the side after seeing my brother with a purse swung around his shoulder.  Mr. Shiteed was a family friend by default.  My folks loved his wonderful wife, but Mr. Shiteed was the purulent sore that stuck to wifey’s cheek. He was unavoidable.

"Love me, love my husband,” she once told my mother over coffee and cigarettes after the subject surfaced of her verbally abusive counterpart who launched assaults at her young children, who by the way were not his own.
Mr. Shiteed was a brazen, mouthy, hells angel who couldn’t help but throw in a cuss word to describe his hot piece of meat wife, which he felt compelled to share - along with their sex life - on a regular basis.  We all hated him.  He drooled, yelled and shot death stares at young children right there in the open public.

Us Browns had a way of sucking in all the tolerance as if holding our breath when he was around, especially my dad, the 6 foot 4, 250 pound softy that he was.. Bottom line, we truly loved everyone in the family with that one menacing exception.


My parents agreed to meet the Shiteed family for pizza at a very neutral location with the intention of eating and leaving on their time, not Mr. Shiteed’s. Left up to him, the entire crowd would be subject to countless alcohol soaked hours of loud stories about his time in ‘.


On this night, my mother enticed us kids by offering up the treat that is the rare visit to Luigi’s Pizza.
My brother asked if he could take his purse. My folks, being the self expressionist hippie parents they were, said of course. JimBo stuffed his “action figures” aka dolls into the little red vinyl purse which donned three yellow daisies on the front. It was cute, especially slung over my brother’s shoulder.

The little red purse used to be mine but I had since outgrown it and had moved on to a hot wheels carrying case. The little red purse went to someone who appreciated its versatility. I, however, yearned for a modern, hardened look. I was so over convenience.

By the time we were buckled in and half way down the block, my folks mentioned as a side note that we were meeting the Shiteeds. I asked for clarification: was Mr. Shiteed gracing us with his presence?


“We have to accept people for who they are,” which meant 'yes' coming from my sensitive and diplomatic father.


“Turn the car around!” JimBo and I screeched from the backseat.


Thoughts of Mr. Shiteed shouting at our friends and picking his teeth with his straw plagued our young minds.

My brother clutched onto his little red purse in fear. He was at that stage where his purse went with him everywhere and the thought of Mr. Shiteed poking fun at him was paralyzing. But he wouldn’t have pizza without it. The purse was his security blanket.  It carried life.  Aside from his “action figures”, the purse carried his candy, baseball cards and his Merlin game. He couldn’t very well leave it behind. Thus, we all felt the anxiety of that purse in the presence of Mr. Shiteed, including my father.


The Shiteed family was already outside, waiting impatiently for us. As my folks stopped to greet them with hugs for wifey, head nods for Mr. Shiteed, JimBo and I darted for the door without acknowledging the daunting clutches of Mr. Shiteed’s wisecracks.

“What do you mean, what is he doing?” My father corralled Mr. Shiteed to an outside ashtray for a pre dinner smoke, and an attempt to shuffle him outside of JimBo’s earshot.

My father tried to quell Mr. Shiteed’s judgment by explaining it was just a bag to hold JimBo’s toys. “And as his dad, I don’t mind.”

“Yeah, if you don’t mind your kid growing up to be a fairy.”


My father warned Mr. Shiteed that if he so much as looked at his son funny, they were going to take it outside and have a nice long chat. What my father meant was they were going to have a discussion about acceptance and tolerance and subsequently have a meeting of the minds on the subject. What Mr. Shiteed heard was that my mammoth ex semi-pro football playing father would pull the stuffing out of his abdomen with his bare hands.


During dinner, Mr. Shiteed didn’t even so much as glance towards my brother or his little red purse.


That was the last time we ever saw Mr. Shiteed. My mother made it very clear that if wifey and kids wanted to continue to have a relationship with the Browns, they had to ditch the machismo.


And so, Mr. Shiteed disappeared, never to be heard from again.

But the little red purse? That’s another story. It’s securely tucked away in the attic with a couple of JimBo’s Pittsburgh Pirate baseball cards in the side pocket. I think I remember seeing an old Andy Van Slyke card in there when I was going through some old photos and happened upon the vinyl gem. I bet it’s worth something – the card and the purse.


I hope JimBo digs it out of storage and let’s his son tote it around someday. It's good for sensitivity training for the Brown pedigree.
Posted by A Mordant Brown at 9:13 PM