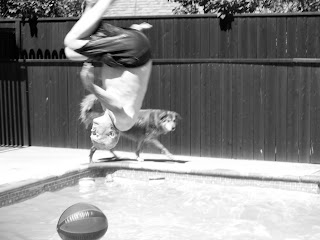 I turn 40 today. The biggie.. although, I am not approaching it in the way my old bag friends who are much older than me approached theirs. I am not complaining. I don't feel old, and relatively speaking, I think I have my crap in order, or so I'd like to think. From what I have learned, balance is key. Work hard, play hard.

It hasn't always been that way. I had to learn balance.

Happy to report that 10 years later, I am cured of all of the aforementioned illnesses, with the possible exception of dementia and maybe impulse control disorder.

But today is about reflection for me. And 10 years ago, albeit a free wheeling time in my life, had its challenges. And my partner in crime to help fuel that bad behavior was my buddy, McFet.

I recall a particular incident where I had just apologized to a Senator for perhaps inappropriately hand gesturing to show my disdain for his unpleasant response to my testimony in a hearing. It was a bad day for all involved.

After I walked out "of the principal's office", I called McFet.

Within five minutes, he was outside of the capitol waiting for me in his pickup truck to take me to have a little download, which meant a Chadonney over ice at a local bar.

While driving to said bar, we happened upon a van at a stop light. Behind the drivers seat was a clown. That happy clown with his bright nose and brighter outlook on life royally pissed me off.

I might have shocked the clown with similar gestures from earlier that day. I can't quite recall, since it's been 10 years.. (dementia).

McFet almost drove off the road as his spazzing laugh made it impossible to control a vehicle.

And during my 30th birthday party three days later, McFet surprised me with a clown. And if I am not mistaken, it might have been the same one in that van because he seemed apprehensive and scared of me when he showed up at the party.

These types of shenanigans continued throughout the decade. Let's see.. there was the time McFet got frustrated over who the hell knows and almost pulled a newly planted city tree out by it's roots.

Or when he was overly cautious driving home after dinner and wine at my house because of the cop parked a block away for 60 straight days. He thought it was a sting operation on him and him alone. I noticed while driving by couple of months later, there sat a nice looking dummy behind the drivers seat. Hat askew, blank plastic stare into oblivion.

And then there was the time we went camping and mountain biking up in Mendocino and caught two men in the bushes in a very intimate situation during one of our downhill rides. McFet lost control of his bike and bloddied up both knees right in front of them. He also blew out his front tire and had to hobble out of there on foot.

Today I should be celebrating all of our "accomplishments" with McFet over a healthy meal, a bottle of wine and a couple of hard laughs.

He would likely tell me that I need to slow down and start acting like an adult. I would probably respond with something snarky like, "yeah, if you're any role model, I'll be acting like an irresponsible teenager until I'm 70."
Posted by A Mordant Brown at 10:09 AM