A Stranger in My Own Land 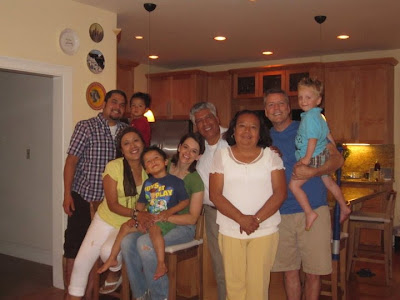 Pants and I made a concerted effort to raise our son, Yack to be bilingual. When he was a mere fito. By the way, to my monolingual readers, fito means embroyo – a word I learned yesterday at the El Festival del Dia De Las Madres, but more on this later.

Pants wasn’t 100 percent sure on my whole bilingual idea but since he was hell bent on raising our child Catholic, he went along with it. Note: I didn't have any objection either, but I am the lazy version of Catholic – Episcopalean – did I spell that right? And after reading the cliff notes on Catholicism, I figure it was good to teach your kid to be kind to others, pray to God who is going to watch over you, and don’t judge. I wasn’t sure I had the requisite mom tools to do that all myself. I welcomed the church’s assistance.

Pants went along with my line in the sand because I was so accommodating to his. When mi fito was about eight months gestation, we began looking for a nanny who spoke Spanish. Our search didn’t take long because once we found Nena, the jig was up. We fell in love with her and her entire family. In fact, Nena is Yack’s God Mother. Papa Nena is Yack’s God Father. We are one big happy extended family.

Nena comforts me by speaking English because it’s glaringly obvious that her English is way better than my four years of high school Spanish. And so,through this little exchange, Yack seems to have mastered both languages, and Nena seems to be improving in English. I too just keep getting better at English. Hmph.

Part of the deal (in my own head) was that Nena would be mean and make me speak Spanish. We even tried this a couple of times. She would just start rapid firing her native tongue at me, but stopped after awhile when I just nodded and smiled. My head hurt, but she sounded so nice.

But as time progressed and our families became closer, there was many an opportunity for me to be hoisted into a whirlwind vernacular of unknown sounds and accents.

First, Tita and Tito. Nena’s parents. They do not speak English and when they visit from Mexico, it’s sink or swim time for me, which usually means I am two inches under water breathing through a straw. (Nena does very little translating unless I ask, and I don't ask.)

Do I feel self conscious, anxious, and well, dumb? That would be a yes. I can’t express how many times I have started a conversation with, “como se dice” – how do you say…

But it’s not just the language barrier that makes me feel that way. It’s also the culture. Sure, I feel very privileged to be a part of it. And I haven’t an ounce of regret for having our son grow up as a member of the Mexican community, but it sure can be intimidating. For instance, raise your hand if you are not Mexican and you know what a posada is..

Didn’t think so. This is a tradition that occurs during Christmas time. It’s a ritual reenactment of Mary and Joseph’s search for lodging in Bethlehem. She is pregnant. They keep getting turned down. For twelve evenings, prior to Christmas, there are parties at a different house. This includes knocking on a lot of doors, singing Spanish songs, drinking hot chocolate and banging the crap out of piñatas. And I offered to host one of the nights. How difficult could it be? I don’t know, how difficult is it to have twenty people in your house who don’t speak your language and are asking you where the bathroom is?

Cut through the anxiety, and there was me loving it, and sad that we didn’t do something like this around our neighborhood. I don’t even know the name of the guy on the corner. He has a nice dog, though.

Or, how about just yesterday’s Festival Del Dia De Las Madres? I went with Yack, Nena, Papa Nena, their boys and Tita and Tito. It was at their church which is also where Yack and Nena’s hijo go to school. Yack is the only non-Mexican kid (by skin color alone), and it doesn’t phase him at all. I am jealous of this.

The first half of Yack's class is in English and the second half is in Spanish. He exudes confidence during both times. In fact, one day I was helping in class during Diversity Week. La maestra was teaching the children about being different but celebrating and respecting those differences. “Class, who among you looks different?” Many brown arms darted towards the sky. And in unison without being called upon, they all said, "Yack!". When I looked at my son, he was beaming with pride. He scanned the room, relishing in all eyes on him and pointed to himself, “Me!” He smiled. He liked being different.

As we were standing in line to get into the gymnasium for the Festival Del Dia De Las Madres, I said to Tita which probably sounded like a preschooler in Mexico, that Yack is going to miss her when they leave and I asked her when her flight leaves. “Dos y media en la manana.” I got that no problem, but then she began to talk to me about the airplane, and I think sleeping was mentioned. And something about airplanes again.

We strolled into the Festival where I was pinned with a ribbon to indicate I was a madre. Yack was behind me but bolted when he saw his Mexican classmates from preschool. “Mira, Mami, es Diego..”

As I looked around the room, I noticed that I was Yack in the preschool classroom that day. I was the only white person there, and clearly the only one who didn’t speak Spanish. I was the different one.

Why was it that my son could handle diversity with ease and even thrive on it, but I was feeling that I didn’t belong there, that I was somehow intruding in on a piece of culture that wasn’t my own? Funny, everyone there was overwhelmingly kind and made me feel welcome with hand gestures and smiles. But the way I was feeling is probably how Nena feels when she is shopping, eating at restaurants, pumping gas, going to museums, parks, the ice cream store, getting clothes for the kids, going to the DMV.

Nena is an angel. She translated for me and handled the seating arrangement. She spoke in quick expressive tones to the hostess and introduced me to the Father. I decided that being there was good for me, and began to soak in the culture – the smell of beans, rice and corn tortillas wafting in the back, the mariachi music echoing on the gymnasium’s ceiling. The video of the fitos...

I sat in between Tita and Tito and began watching the video. It appeared to be a video of a fertilized egg, and then the fetus and then the embryo. I didn't contemplate the political undertones, merely took in the beauty of a little frog turning into a baby, then suddenly Tito hit me on the shoulder, pointed and said, Fito.

Instead, I just put my hand on Tita’s back and gave her a little rub. She kissed me on the cheek.

Maybe she knew what I was thinking. Maybe they both did.
Posted by A Mordant Brown at 3:46 PM