Getting Schooled by the Pool 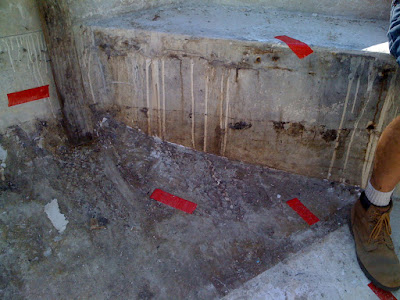 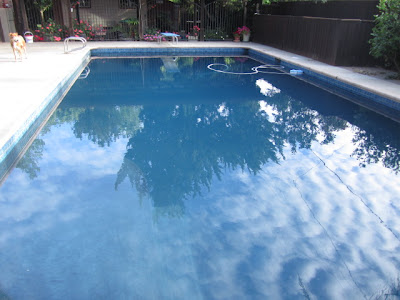 It began as a required feature during our house hunting spree five years ago. Pants and I wanted, no, needed a pool. Considering the fact that we suffer through 110 degree summers, feel a perpetual need to have fancy things around to attract friends, and harbor a nagging yearning to recreate the volleyball seen in Meet The Parents, it was more of a necessity than say a kitchen or bathroom.

The house on which we ended up settling was in a word, dumpy. But it had one hell of a pool. The first time I laid eyes on it, I thought it looked Olympic. Do they even make pools this big anymore? Certainly not, as it accompanied our 80 year old tudor. The pool came with a springy diving board to boot; I was giddy.

As Pants and the real estate agent were “envisioning” a complete remodel of the inside of the house, I was bouncing on the diving board in the rain donning my jacket and boots. Thoughts of margarita fueled swim parties fogged my head.

I was sold. We put an offer on the house that the owners couldn’t refuse. And since it was a seller’s market at the height of the bubble, we overbid. No one was getting this pool but me. No one.

The house needed so much work that we didn’t move in for eight months. I paid no mind. I went to my pool after work, on weekends and I swam in it lap after lap. Pants came along too. He had to. Someone had to oversee the demolition project inside the house. As he peered out the window covered in sawdust, I would wave during my backstroke.

Things began to change when we finally moved in. The pool turned on me, on us. The first red flag was the insurance agent. He told us we had to get rid of the diving board. He told us that it’s a liability waiting to happen. (If you jump at just the right angle, you can hit your head on the wooden patio overhang but only if you’ve been drinking heavily is there ever a chance of that happening, which knowing my guests, put the odds at probable.)

I freaked. There's no way we could get rid of the diving board. The property value alone would take a nosedive. Pants told me to calm down, that there was a way around this little snag.

So, we lied. “Yes, we will take it down.” We have since painted it with a grainy finish to really improve on the footing and grip. And this is after we were told that painting a diving board is not a good idea because you can’t see age defects or cracking in the board if it’s refinished. “It’s a liability.” Uh, yeah, we know that, but so is driving to work every day but you don’t see me scaling back that activity, now do you?

Then the pool started turning colors, a swampy green to be precise. It didn’t happen overnight. It crept up on us, starting with a slight Gatorade color. “Perhaps it’s the way the sun is setting, right, Pants?” I would sway back and forth, squinting my eyes from the kitchen window.

“Why yes," Pants would reassure me, "the sunset appears to be green this lovely evening.”

I knew we had to call in reinforcements when I was swimming one day and couldn’t see my own feet. So, we hired a pool guy, who told us that the thinger ma’ bobber needed a new motor. So we bought it.

Then another pool guy that we hired after “letting the other one go” told us that we needed to clean the filters every other day. So we did that.

Then Pants decided that he was going to tackle this little pool problem on his own. "No need to throw money at someone who isn't going to tell us how to fix the damn pool." So we began throwing money at troubleshooting. We spent nearly our mortgage payments on chlorine, metal free, acid, neutralizer, non neutralizer, de fogger, anti aging agents, algae controllers, and salt. Yes, even salt. And sometime Pants' efforts paid off, but only so far. The minute he would get it back from swamp to Gatorade, we would cheer with joy, knowing that a bright blue was within reach. But then we would have to add water due to evaporation, or was it a leak? And then we would head three shades back to swampland. I was afraid that I was going to lose something in it, like my bike, or my dog, like that Chihuahua found in the swamp in Florida after 19 days. Don’t believe me? Google it.

We began cancelling parties which is what I considered hitting bottom. Sorry, I would email, not this weekend. We are out of town. When friends asked if they could drop by anyway to take a dip (yes, we have a few friends under the category: "I am only friends with you because you have a pool and I am going to prove that fact while you are out of town this weekend and during the Winter when I will pretend not to know you), I would have to indiciate that the pool was under quarantine.

We began to retreat to the cool mountains, forgetting we ever had a pool or friends.

I gave up on that pool rather quickly, but Pants couldn’t let it go. It became an obsession with him. I would wake up at 6 a.m. and get breakfast ready for Yack. I would look everywhere for Pants, until I heard the scrubbing sounds of the Polaris. I would follow the sounds to the backyard, where I would see Pants sweeping the sides of the pool down in his pajamas. Stripy and flannel, if you must know.

Weekends were spent in hiding from our friends, with Pants driving back and forth and back and forth and “I have to make one more trip to the pool place before they close”. He would pour and clean and spray and take apart and put back together. I could add up the hours of time spent on the pool for you here, but I don't want to be responsible for spreading that negative energy around the world wide web.

On one particular evening, we were discussing Pants’ pool frustration with a sharp tongued and opinionated friend (those are my favorite). He told said friend that he had done everything he could do to that pool. He’s poured every type of product and cleaned every piece of equipment.

“There’s nothing else I can do”. He looked sad.

Snarky friend responds, “Why don’t you pee in it, see if that works?”

And that’s exactly what Pants did. He marched out the back door, stood at the water’s edge and proceeded to take a long, beer soaked leak into the pool.

But that didn't work either.

Then one day, the fifth pool “expert” came over and told us that the wood bench underneath the old and decrepit fiberglass at the shallow end of the pool was rotting - the cause of the green swampy tint. "It's probably making your skin itchy too." Funny, since it had been over a year since I swam in the damn money pit, I would be happy with a little itchy skin for the sake of a good ol’ half gainer.

Based on #5's assessment, Pants and I made the very difficult decision of draining the 30 thousand gallon pool (for the third time – our sincere apologies to our neighbors), and scrape off the fiberglass, take out the bench and redo the entire pool for the low low price of $eatbeansandriceforayear. Pants believed that by scraping off the fiberglass himself, thus exposing his lungs to asbestos and other unknown chemicals, it would save us a good chunk of the cost. It did, but if he keels over prematurely due to a rare form of lung disease, I am going to be pissed.

This little project took over three months, and cut into my pool time in a serious way. Alas and just in time for winter, the pool project was complete. And it was beautiful. Every shade of blue imaginable permeated through the glistening waters. I felt a sense of euphoria and a new found attraction to Pants. After an entire year of trial and error, my man mastered the art of pool maintenance. Perhaps we should start a side business.

And with the beautiful warm blue skies came an olive colored cesspool.

Pants ignored the change in our pool’s demeanor. He took off on a trip with his old high school buddies and drowned his sorrow in manly things and left me and Yack to stare at the pool in disgust. We attempted to ignore the pool by not making eye contact with it. We kept ourselves preoccupied with play dough and paints indoors with the shades drawn. We also went on long trips to the park. We even saw a pool at the local park, so inviting, so clean, so blue.

“No honey, we don’t have your bathing suit. Besides, we have a pool at home. Daddy is going to fix it when he gets home.”

“But that pool is yucky.”

When Pants got home from his trip, he called pool guy #6 who put Pants at ease the minute he arrived. He spoke in soft tones and used a lot of eye contact. He listened to Pants lay out the chronological trials of the pool while putting a supporting hand on his shoulder. If I wasn't mistaken, I might have even seen Pants shed a tear. I could be wrong about this as allergy season is approaching.

After assuring Pants that all will be right in the world, pool guy #6 dumped enough chlorine to blind a large elephant and told Pants to be patient.

That night, we went to bed anxious, hoping that pool guy #6 was here to save the pool, to save us.

And just as if it were Christmas morning in May, we awoke to azure beauty and a renewed hope for summer and our sanity.

So to my dear seasonal friends, you may return with your towels, your large brimmed hats and barbeque meat, for we are back in cannonball business. But make it quick. This blissful state of affairs is bound to be fleeting.
Posted by A Mordant Brown at 8:37 PM