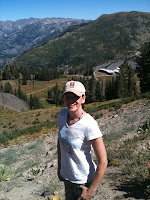 I may be smiling on the outside, but I am crumbling with fear on the inside. Last weekend, the brood and I decided to scope out the terrain and the course of the dreaded Tough Mudder run. This turned out to be a very bad idea. It sounded good at the time, though.

We had two friends up at our cabin for a little hiking, a lot of food and some libations. During our wine soaked discussion on Saturday night, our committed friends decided that they were going to come up to the mountain that weekend and help cheer us on, and assist with watching Yack as he would surely want to follow his parents through the mud and tunnel courses. Being two, this race would probably appear to him to be nothing but preschool on crack. We needed some dedicated souls to hold him back as mommy and daddy plunged into oblivion.

Since our cabin is exactly 18 miles from the ski resort, (or death march as it were), we decided to hike it the next day. Having downed a couple of bottles of wine between us, it sounded like a good idea at the time, but when we woke up, it was the last thing we wanted to do.

The base of the mountain is at about 7,000 feet. Simply getting out of the car gave me a nose bleed. I realized at this moment as I struggled to pick Yack up out of the car seat that this was going to be ugly. And as of that moment, I had 42 days to psyche myself up for the hell that will become my reality.

As I hoisted my little man into his backpack (this child’s back breaker is typically made for a 2 year old who doesn’t weigh 100 pounds), I peered up into the sun and atop the mountain where heaven was shining brightly whispering to me, “return to the car and get the heck out of dodge”. Alas, I have been known to ignore the whispers from Heaven.

Our group approached the base of the mountain and noticed that the Tough Mudder staff had already begun assembling the various torture contraptions throughout the course. There were several narrow PVC pipes – likely for sewer lines – that were lying together side by side. My guess on width would be about 2 and a half feet wide which would be an overstatement. I put Yack down and climbed through, just to see. Just to test the waters. As I army crawled my way through the tube and over the pipe’s divots (ouch, they hurt my forearms, not to mention my knees, shins, and tops of my toes), I began to feel a sense of claustrophobia. Crawling backwards would prove my weakness. I put my head down, closed my eyes and crawled to the light.

Yack was right behind me, making a mockery of my Achilles heal. “Mommy, that was fun. Let’s do it again.”

No thanks. I’ll wait until there are 50 people behind me with mud caked on to their bodies, yelling at me to go faster.

Next, we decided to climb to the top of the mountain as we followed the map we pulled off the Internet. According to the description, we were supposed to be running up the mountain. I, however, walked. Let me rephrase. I stumbled, digging at any hole or sturdy terrain that I could find with my climbing boots to reach the top. (According to the Tough Mudder preparation manual, one should wear tennis shoes). I had to stop about five times to catch my breath and curse the clouds above for more air. I figured we were now at about 8,000 feet – not enough air in the world to help my dizzying state of affairs.

Reaching to the top was euphoric until Pants showed me the map. “During the race, we have to crawl up that face,” pointing to a mountain that looked to be at a 90 degree angle from where I was standing, “and we have to do that four times. The last time includes us carrying a tree log on our shoulder.”

That’s when the air left my head, my heart, my lungs and my feet. The air was on to something. The air was right. “Get out now!”

As we plunged down the side of the mountain back to our car, my thighs, knees and lower half of my body screamed in pain. My dear friends giggled in delight as they knew what we were headed for – watching me panic is something that brings them pure joy. What great friends.

And to make matters all the better, as we put Yack back into the car and headed for the brewery for a nice liquid lunch, Pants proclaimed in earnest, “Now, that wasn’t so bad, was it?”
Posted by A Mordant Brown at 4:35 PM