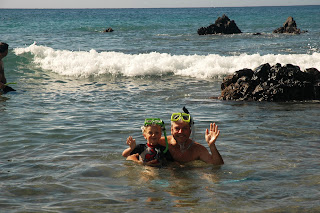 ﻿
Most of my fears are legitimate. I hate snakes, big hairy spiders. I also hate roller coasters. They are typical in nature: it terrifies me when my son thinks he’s a goat and has to stand on everything higher than two feet tall.

I have also been so scared, my bowels ceased to function properly when I mortgaged my home to start a business. I got the same physical reaction when I signed a death waiver the first time I did the Tough Mudder race back in ’10.

These situations, I’d like to think, would scare the average Joe.

But sometimes my fears don’t make a lot of sense. And I am about to share one of them so go easy on me. Please refrain from the kitty cat comments. Do me that favor.

On a vacation to Maui recently, my husband talked my son and me into taking a snorkeling trip. I had only attempted the "sport" once in my life and was so clumsy that before I even entered the water, I snagged my ankle on some coral which bled like a sieve and that was the end of me. The trail of blood could have brought on some unwanted ocean predators. That was back in 2005 and I was fine sitting on the shoreline with my warm Corona Lite watching my friends – or so I thought they were my friends. I couldn’t tell who was who with the tubes sticking out of the water and their butts in the air.

Up until our recent trip, snorkeling never crossed my mind. Scuba diving has, only because I have a friend who travels all over the world going on scuba trips. She is a certified dive instructor, meaning she could probably save people. She also claims she has been eyeball to eyeball with eels, sting rays, dolphins, even sharks. I am raptured hearing about her underwater adventures, but have no desire to join her. Just the thought of being out there in that underwater jungle with no quick exit gives me the heebs. I love hearing about her dives, though - the complex nature of her equipment, what could go wrong if you aren't careful, the creatures she has seen and touched. She seems so brave and I swoon over her stories.

She interprets my interest in her stories as interest in the sport. She has even offered to come over and show me how it’s done in my pool. Fine, I say, but can you guarantee there won’t be any coral or creatures or slimy fish when we do it for real? She can’t.

I placed this little thought of panic into the very back file cabinet of my brain as we set off to snorkel in what Greg the Maui Activities Coordinator said was some of the best snorkeling on the island. I mean, really. My five year old was thrilled. What was my problem?

Yack and Pants were first to get in the warm Pacific ocean. The waves were calm and warm, inviting me in. I remembered my little equipment lesson from Clayton at Boss Frogs and synched up my mask by sucking in a deep breath through my nose. The mask was so tight, my eyes felt like they were coming out of their sockets. And I made the very uncool mistake of talking which caused my son to convulse in fits of laughter. Apparently, I sounded like Goofy and looked like him too.

First lesson in snorkeling: once the flippers are on, walk backwards. I learned this the hard way, doing a face plant in the sand while Yack and Pants laughed at me. Another way of putting on the flippers is waiting until you get in the water. Plain common sense – eluded. Oh, and don't call them flippers. Apparently, these clown shoes are called fins.

After three false starts and four mask adjustments, I was ready. Pants and Yack were already out about 15 yards, leaving me and my anxiety behind.

While submerged, I noticed my noisy, labored breathing. I also noticed the way I felt: like a Cro-Magnon heaving air through my mouth while biting furiously on my nozzle. The only time I find myself in this state is when I am sweating at the gym, running from bad guys, or engaging in other activities that shall not be divulged here.

As the adrenaline coursed through my veins, I told myself to keep calm, to enjoy this. When you’re under the sea, checking things out, your peripheral vision is shot because of the mask, so you can’t know what creepy crawly things are beside you, or worse, behind you.

The biggest challenge for me was avoiding the coral. The pain I felt the last time I nearly decapitated my foot at the ankle came back as a vivid memory and spazzing through the giant coral reefs became the norm. Not to mention, the further the tide carried me out to sea, the bigger the sea creatures became. I saw a purple and red fish the size of my head. He stared at me, daring me to float closer. I could have sworn I saw teeth the size of chiclets on that one. I also experienced a school of smaller yellow fish following me, nipping at my toes that peeked out of my fins. I would be remiss if I didn’t mention the eel-snake-like green thing swimming below me with antenna and a whipping tail.

I closed my eyes, tried to calm myself and swam further from shore. Pants advised me that I would see some spectacular sights if I just make it to the reef about 100 yards off shore. So, I trudged on.

Up ahead of me was a very large shadow. It was hovering between two big pieces of coral that just about touched the surface. I stopped swimming but the tide swept me closer towards it. Reality hit me: I was five feet from a sea turtle the size of a beanbag chair. It inched it’s neck my way, lifted its fin and swam out of the coral wedge right towards me.

After I urinated in the water in the hopes to set off a warning signal, I whipped around and swam like hell back to shore, grabbing on to any piece of coral in front of me to leverage my speed back to terra firma. The theme song to Jaws began playing in my head as the door knocks of my breathing pounded my ears.

I stood up in knee high water and began running for shore, forgetting I was wearing fins and took a nose dive in front of my family.

Pants asked if I was okay. I told him I was a little shaken up, but that’s to be expected when you are being hunted down by a giant sea turtle.

Pants then put on his snorkel gear and headed out into the abyss for a glimpse of the terrorist. He found his friendlier brother – probably the one who played Crush in Nemo - and followed him for ten minutes out past the reef.

When Pants returned, he was enveloped with adrenaline, but not the kind I was experiencing. His adrenaline made him want to go back out again the next day and have lots of beers and talk about how great our trip was.

My adrenaline made me wake up in the middle of the night from a nightmare I had where attack fish were biting my legs. As it turned out, it was Yack who had crawled in bed with me at 4 a.m. and was rubbing his untrimmed daggers we call his toenails against my shins.
I didn’t fall back asleep after that. Nor did I snorkel the next day.