The Man On the Street 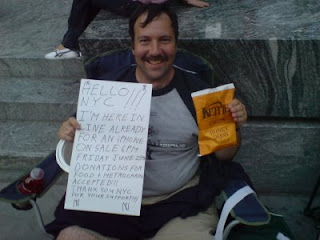 I happened to be occupying a middle seat on a Southwest flight from Orange County back to Sacramento about two years ago. I was pissed because I didn’t have any reading material. My work files were tucked away in the overhead bin – likely a subconscious move in order to completely avoid whatever assignment awaited me after my work trip. My book version of a chick flick was abandoned on top of my comforter at home. I could envision it, sitting there, spread open so far that the spine was stretched to its max crying for me to come home.

To boot, I was sitting next to a snorer to my left and a loud iPod player to my right. I couldn’t recognize the thumping base. Probably not in my musical repertoire or I might have enjoyed having it blasted in my inner ear.

I tried unsuccessfully to catch a quick nap. I was on this rare occasion bored out of my mind.

I picked up the reading material that was stuffed into the pocket in the seat in front of me. I had no interest in breezing the airline shopping mall for nose hair pickers and six foot garden gnomes, so I put the magazine back.

And then my world shifted, just a little.

I picked up the Southwest’s rather mundane knockoff of Esquire and began scanning its contents –Vegas is lovely in the summer if you stay indoors; Willie Nelson is On The Road Again; the SWA President’s message – thank you for your business. But the article that completely captured my attention was one about Greg Packer, a resident of New York and native of Long Island.

I read and reread the article, soaking in all that this guy had accomplished to eventually come to be known as the most quoted man in America.

After graduating high school in 1983, Greg Packer eventually earned a living as a highway maintenance worker in Huntington, NY. He retired and began a very successful outlet of reaching out to the masses and being quoted in several hundred news outlets throughout the U.S. not as a reporter, but a regular guy on the street. How does he do it? By standing in line.

Greg has done it all. Google his name and there are an overwhelmingly number of hits of him at certain high profile events, offering sound bites to reporters that invariably get in the press.

Take the time he stood in line for 110 hours before the iPhone went on sale, becoming the first to not only purchase the devise but be filmed and photographed walking in to the store. His efforts don’t stop there, in fact, he has been quoted or photographed at least 16 separate times by the Associated Press, 14 times by Newsday, 13 times by the New York Daily News, and 12 times by the New York Post, according to Wikipedia. He has had the opportunity to meet people including Madonna, Hilary Clinton Mariah Carey, Garth Brooks, Dennis Rodman, and Ringo Starr, as well as at least three presidents of the United States: Jimmy Carter, Bill Clinton, and George W. Bush. Most of these people recognize him and know his name. He has been quoted on his reaction to military strikes against Iraq, the Thanksgiving Day Parade, the opening of the new Star Wars movie and at countless Yankees, Mets and Jets games.

He was also the first to sign Princess Di’s condolence book and the first to be scolded and called out by Anne Coulter as being a shill for the lazy media, “It was easy for the Times to spell Packer's name right because he is apparently the entire media's designated "man on the street" for all articles ever written.”

At the time I read this article, I was writing for the temporarily dormant magazine, California Conversations and decided to interview Greg. I was fascinated with his methods, the way he seeks out these events, his consistently quotable quotes.

I found Greg’s contact info – it wasn’t hard, and reached out to him with my request. He not only jumped at the chance to be interviewed, he suggested a trip to California so I could see this gig really worked – in the flesh. Now some may question the safety of connecting with a perfect stranger, but all potential fear dissipated with my first phone call with Greg.

His thick New Yawk accent captivated me during our first conversation. I began speaking like him right away, for even today I attempt to “talk East Coast” when I want to make a point while sounding tough and friendly at the same time. Our conversation went as follows:

Our banter became almost instant, but so did our friendship. We began planning our trip to seek out Jesse Ventura’s book signing in LA. I started checking flights.

But then the sweet, successful magazine didn’t have the staff at that particular moment to ramp up another edition, so here I sit, itching to write about the (mis)adventures of Greg Packer.

In the meantime, Greg and I still keep in touch. He sends me a Mother’s Day card every year. Very sweet. I have even seen him on TV on two occasions – one time during the Today show as I got ready for work. It was Friday and the network was having a concert in the park – the New Kids on the Block. In the sea of middle aged moms, there stood Greg, holding a bright yellow umbrella in the rain, waving to the camera. I thought I might be seeing things so I rewound the program and paused it. Unmistakable. I called him. His voice mail box was full.

Another time, I was watching a program about Steve Jobs and the crazed outpour of the iPhone. Sure as day, there was Greg Packer being interviewed walking into the Apple store, albeit a little unkept, sunburned. Cameras were flashing from all different directions. It was then I realized that Greg is more of a celebrity than those he seeks out.

I follow Greg on Facebook and keep up on his daily statuses which are laden with sports and celebrity events updates. In fact, Tuesday’s status update was the following:
GOT TO SEE QUEEN ELIZABETH THE 2ND TODAY STANDING AT #10 HANDOVER SQUARE IN NYC IN SPITE OF THE RECORD 102 DEGREE HEAT,AN EXPERIENCE THAT I WILL NEVER EVER FORGET!!!!

I will someday get my chance to spend what will undoubtedly be a most memorable occasion with Greg Packer, and I will live proudly to write about it.

Until then, I will have to settle on those updates from the man that continues to put a smile on my face: