The Princess and the Pee 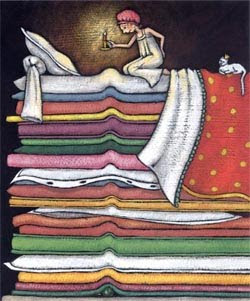 I used to be an expert at sleeping. I would get a good nine hours plus a night regularly, and when my lights were out, there was no shaking me out of my sacred slumber. Bang a few trash can lids together, use a leaf blower, unload the dishwasher – nothing was going to get me up before I was good and ready for day break. I was in solid, dreamless slumber until at least 7:30 a.m. on weekdays, 9 a.m. on weekends. It’s what I did best. It’s one of the few things of which I am most proud.

All of this somewhat changed when I started slumbering side by side with my husband, Pants. In this particular segment, I will refer to him as Princess and the Pea and not in an endearing way.

Some may argue that I don’t have a lot to grumble about – he doesn’t snore, he doesn’t have restless leg syndrome (whatever they are trying to sell at 2 a.m. on my beloved Infomercial channel is something that I have considered purchasing.) He is generally a diplomatic sleeper. He tip toes to the bathroom when nature calls in the dead of night. He never flips on the overhead light when he needs to read to fall asleep. He stares at the ceiling mummified while I saw logs. So, the sleepless nights fall in his camp, not mine. Let’s be clear: Pants has a sleeping disorder. The disorder is that he can’t sleep. We have talked over coffee (bad idea), over wine (a grade A sleeping aid in my personal experience) or a carbo load pasta meal to dissect this issue that is affecting his ability to sleep, thus affecting his productivity during the daylight hours. The conversation invariably goes something like this:

Pants: “I think we need a new mattress.”

Me: “Maybe you just need to up your dose of Ambien. Try taking two.. or three.”

Pants: “Being dependent upon sleeping aids is not a solid resolution.”

Me: “If we buy another mattress, I will leave your ass.”

This last comment puts me into an inner turmoil tail spin. I could just assume sleep on the hardwood floor. I like it hard. The harder the better. I have a fundamental and historical belief that hard surfaces were made for sleeping in the stone ages to ensure that spinal cords were kept in a linear position. No kinks, no pinched nerves, no bulging discs. This is how our ancestors wanted it. Not some squishy mush pot that conformed to your scoliosis ridden hunch back. But Pants likes these types of sleeping experiences, which I call “enablers”. He would rather sleep on a water bed or a box of cotton than anything that remotely resembled a hard surface, or what I would call a regular mattress.

Our first mattress as a married couple was a posture pediatric wonder pad. I frankly liked it. Again, I go back to my original preference – the harder the better. This new mattress wasn’t the hardwood variety, but it was comfortable. I slept for several hours at a time without incident.

Pants hated it. The bed was too hard, he said, claiming that his sleepless wonder world is going to cause him to lose his job. We took back the $1,500 mattress and bought a new one.

Trying to return a mattress after you purchase it is a little like returning underwear after you take off that sanitary strip in the crotch and use it for a few days. Your bacteria is all over the place. Resale is hardly worth it to the retailer. How are they going to remarket that stuff? “Mattress: slightly used by couple of over 20 years. Used only for sleeping.” Or, “gently used undergarments by someone who didn’t use the loo a lot.”

So, we sold our “gently used mattress” on Craig’s list.

For half the price we paid.

On to mattress number two. This one was supposed to be primo and contain microfibers. Supposedly, if you put a glass of wine on the corner of the bed and jump in the middle, the wine wouldn’t spill. But it did. We slept on the wine stained mattress one night. Well, I slept. Pants rolled back and forth and mumbled about how he was sleeping on a bed of needles.

So, we sold that one on Craig’s list too under the title, “Commercial experiment gone awry.”

This was sold for a third of the price for which we bought it.

Pants had heard that the new sleep number beds were the shizzle and I was tired of sleeping on a box spring so I said let’s go for it. After a five grand net loss on bed products, my patience was wearing thin. Anything would do at this point. I hoped that this time would be the last in a couple of years that we would have to throw money out the window on mattresses that weren’t just right.

Pants began to blame his ailments on the bed – his rotator cuff, his lower back spasms, his tired mood swings.. I felt as if I were living in a 1940s fairy tale. So I broke down and agreed to the remote control mattress which set us back by a few vacation trips to Hawaii – ah, but if it made my dude happy, what’s a couple of missed vacations stuffed in a sleep filled mattress? As long as he was sleeping.

On our first night in our new high tech bed, I had these intense dreams – dreams that brought forth images of flying gargoyles and man eating spiders, and a work day that would never end. This was a rare occurrence as I never dream; subconsciously I knew the higher ups were playing their hand. They were sending me a message I couldn’t quite understand… that is, until I woke up in a puddle of my own urine. Now, imagine how odd it was to me have soiled my bed when that has never happened in my adult life. I abandoned that part of my self conscious behavior back when I was eight after my first (and only) viewing of Friday the 13th. Why now? Why as a 37 year old?

Perhaps it was my way of putting a stop to the mattress madness. Perhaps I needed my husband to just stick with a decision and deal with the pain and anguish that came along with a sleeping condition. Perhaps I needed him to start looking inward rather than what’s holding him up horizontally.

Perhaps I am just tired.

Perhaps I am not really happy with the fact that I am stuck with a remote control bed that doesn’t satisfy my sleep necessities in the least. I mentioned to Pants tonight as we were putting our much overdue clean sheets on our bed, “you know, Pants, I hate our bed. I feel like I am on a rocking boat, and that I keep rolling into the middle.”

He smiles and says, “too bad we can’t sell it on Craigs List. You can’t sell pee on Craig’s List.”
Posted by A Mordant Brown at 9:43 PM