The True Meaning of Messaging 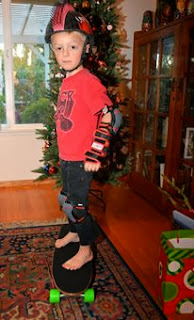 “Mom, the Elf on the Shelf brought back a letter from Santa.”

Yack was staring at Frosty who was wrapped up in a Christmas tree branch holding a folded up note. Frosty goes to the North Pole every night to make a full report to Santa about Jack’s recent behavior. Frosty finds a new place to hide every night for a month – quite a commitment she makes for keeping an eagle eye on my six year old. And quite genius of the inventors of the Elf on the Shelf – first off, I hate you, wish I would have thought of it first and second, thank you. It’s great to point to a stuffed toy on the ceiling fan and say, “Yack, eat your breakfast or Frosty may not deliver a favorable report to Santa.” It's questionable; a threat in the shape of a cotton stuffed Christmas character. Whatever, I firmly stand by bribery and threat as two vital parenting tools.

As far as the note folded between Frosty’s ringed arms, the dilemma my son faced was that if he touched Frosty, her magic would disappear, but he was bursting from the inside out, dancing around that note, thinking of ways to get at it. He would spontaneously combust if he didn't get his mitts on that note.

Mom to the rescue. I pulled it out from Frosty’s ringed arms as if I were playing an intense game of Jenga, and handed it to Yack. “Dear Yack," he read, "I want you to give away two toys you get for Christmas to kids who need them. You are a good boy. You need to help those kids who don’t have money.”

Yack started jumping up and down in excitement after reading the note out loud. So did I. My parenting skills hit the mark on two counts: (1) I am encouraging him to read, and, (2) he is learning the valuable lesson about helping others less fortunate.

Man, I should do this parenting thing more often.

As Christmas approached, Yack’s anticipation grew. He spent most of his time on his belly staring at the wrapped presents under the tree playing the guessing game. “I think this one is a Red Rider BB gun.”

He shook a present the size of a, well, glow in the dark pillow. I told him I didn’t think anyone, including Santa, would get him a BB gun. “That’s weird because he gave one to Ralphie.”

I explained that movies are not real life and people like Santa have a better understanding about things like safety and getting toys for kids who are too young who might get hurt.

When we visited Santa a couple of days later, Yack sat on his lap and told him he wanted a skateboard. Santa nodded at me and then gave him a candy cane. Way to have a better understanding of age-appropriate presents, Big Guy.

The countdown began and to promote our new found True Meaning of Christmas, Pants and I decided to do a little purging of toys and clothes and pay a visit to the nearest shelter. Yack reluctantly participated, negotiating every outdated item in his room. His favorite line: “I know those pants don’t fit, Mom, but they are made by Shaun White and I could cut them into shorts.”

I asked if he even knew who Shaun White was.

“The guy with red hair who rides a snow board and wears cool clothes.”

I had to wonder, has Yack been alive that long to see Mr. White’s Olympic performances? Then I remembered where we got those pants.

Thanks, Target, for the brilliant marketing strategy aimed at my six year old.

With a tremendous amount of lobbying and negotiation, we convinced Yack to load three large bags in the car and high tail it to a local shelter. Here are a few sound bites from that afternoon:

“Yack, you have a house and clothes and food. Many children don’t have those things. We need to do what we can to help them out.”

“Yack, it’s important to help kids who don’t have the means to have nice things.”

“Yack, what if you didn’t have a house or clothes or toys? If mommy or daddy lost their job, we could be in the same situation. Would you hope others would help you?”

We thought our message was sinking in when I found Santa’s phone number on the Google and prompted Yack to leave a message. This was his last chance to be very clear about what he wanted, as Christmas was a mere 2 days away. After the beep, Yack left the following message: “Hi Santa. It’s Yack. I have been a very good boy this year. I hope you are able to give toys to all the kids in the world who can’t pay for them. That’s all I want. Besides a skateboard."

He wouldn't let go of the skateboard idea, which sucked for me thinking of the brain injuries, the wrist cracks and the numerous trips to the ER, but cool that our message about taking care of less fortunate people was sinking in.

And so, Christmas Eve had arrived, which meant opening an obscene amount of gifts with the older siblings in their 20s and my parents and brother’s family. Christmas day was strictly left for Santa’s gifts and nothing else. As Yack tore through his gifts, I noticed he didn’t give two craps about who they were from or what types of joy the gifts actually brought. He was a lion tearing into a helpless gazelle. I prompted him to stop, read the card, and then thank the people they were from. He did this with tremendous speed and an utter lack of compassion, often times seen embraced in a side hug as his eyes were lasered in on the presents yet to be unwrapped.

After opening more presents than humanly possible, Yack looked around and whispered to me, “Is that it? That wasn’t a lot.” I grabbed his arm that continued to rifle through unopened gifts still scattered around the tree and yanked him into the bedroom. I sat his spoiled can on the edge of my parents’ bed and in my best growl proceeded to tell him all of the reasons why his behavior was unacceptable. I wrote down every present he got on a loose piece of paper I found on my mother’s bedside table and showed it to him. “Look, Yack. Look at all of the presents you got. You are a very lucky boy. You know, today is about being with the people you love and who love you back. It’s not about how many presents you get. Do you understand?”

“Does Santa come tonight or tomorrow?”

Was this kid serious?

But before I was about to put him and all of his toys in a large garbage bag to be left on the back porch, he then said, “because it’s important he reach those kids who don’t have toys first.”

Sweet, we are back on track. You just saved your own life, kid.

The next morning, Yack awoke at the crack of daylight and ran into the living room to see what Santa had brought. Santa didn’t disappoint; the skateboard was propped up against the fireplace along with body armor equipped for battle. Yack was pleased but a little confused. I asked what was on his mind.

“I am glad Santa brought me a skateboard, but I bet he doesn’t bring these really nice gifts for kids who don’t have a lot of money. That’s why he asked me to give away 2 of my gifts. Santa needs to help the poor kids more.”

As I sat there guzzling my coffee, I pondered the life lessons over the past 30 days and had a profound thought: I completely missed the mark in teaching the true meaning of the holiday. “Giving” too many toys to my child actually counteracted my message of “giving”. Oh, and Santa does not discriminate, contrary to Yack's stark conclusion.

And as far as the two toys Yack gave away? An Iron Man action figure he received twice and Jenga. I wish he didn’t decide on Jenga. I love that game.